Ghost of a dying star

This glowing bubble is the Southern Owl Nebula – the remnants of a dying star. 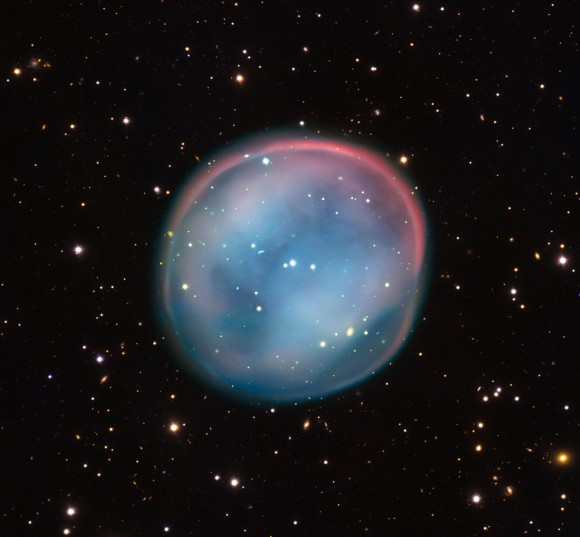 This extraordinary bubble, glowing like the ghost of a star in the haunting darkness of space, may appear supernatural and mysterious, but it is a familiar astronomical object: a planetary nebula, the remnants of a dying star. This is the best view of the little-known object ESO 378-1 yet obtained and was captured by ESO’s Very Large Telescope in northern Chile. Image credit: ESO

The shimmering orb ESO 378-1, nicknamed the Southern Owl Nebula, is a planetary nebula with a diameter of almost four light-years. Its informal name relates to its visual cousin in the northern hemisphere, the Owl Nebula. ESO 378-1 is located in the constellation of Hydra (The Female Water Snake).

Like all planetary nebulae, ESO 378-1 is a relatively short-lived phenomenon, lasting only a few tens of thousands of years, compared to a typical stellar lifetime of several billion years.

Planetary nebulae are created by the ejected and expanding gas of dying stars. Although they are brilliant and intriguing objects in the initial stages of formation, these bubbles fade away as their constituent gas moves away and the central stars grow dimmer.

For a planetary nebula to form, the aging star must have a mass less than about eight times that of the sun. Stars that are heavier than this limit will end their lives in dramatic fashion as supernova explosions.

As these less massive stars grow old they start to lose their outer layers of gas to stellar winds. After most of these outer layers have dissipated, the remaining hot stellar core starts to emit ultraviolet radiation which then ionises the surrounding gas. This ionisation causes the expanding shell of ghostly gas to begin to glow in bright colors.

After the planetary nebula has faded away, the leftover stellar remnant will burn for another billion years before consuming all its remaining fuel. It will then become a tiny — but hot and very dense — white dwarf that will slowly cool over billions of years. The sun will produce a planetary nebula several billion years in the future and will afterwards also spend its twilight years as a white dwarf.

Planetary nebulae play a crucial role in the chemical enrichment and evolution of the universe. Elements such as carbon and nitrogen, as well as some other heavier elements, are created in these stars and returned to the interstellar medium. Out of this material new stars, planets and eventually life can form. Hence astronomer Carl Sagan’s famous phrase: We are made of star stuff.

Bottom line: This is the best view of the little-known object ESO 378-1 – the Southern Owl Nebula – yet obtained and was captured by ESO’s Very Large Telescope in northern Chile.