The Hubble Space Telescope has picked up the faint, ghostly glow of stars ejected from ancient galaxies that were gravitationally ripped apart several billion years ago. 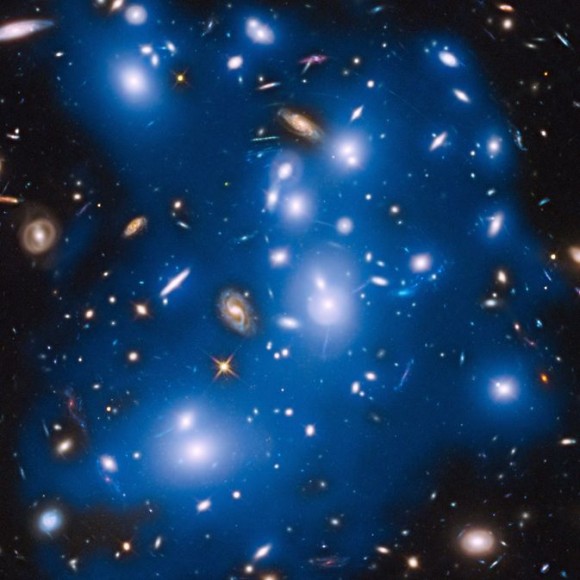 The total starlight has been artificially colored blue in this Hubble view of the galaxy cluster Abell 2744, also known as Pandora’s Cluster. Hubble Space Telescope image via NASA/ESA/IAC/HFF Team, STScI

Witness the faint, ghostly glow of stars ejected from their galaxies. This is the galaxy cluster Abell 2744, also known as Pandora’s Cluster, whose history is now known to be both complex and violent. It’s thought that at least six galaxies in this cluster were gravitationally ripped apart several billion years ago. As a result, many stars here aren’t bound to any one galaxy. Instead, they drift freely between galaxies in the cluster.

Hubble astronomers observed the light of these stars and used computer modeling of the gravitational dynamics among the galaxies. In this way, they’ve been able to estimate that the combined light of about 200 billion outcast stars contributes approximately 10 percent of the cluster’s brightness.

One of the astronomers – Ignacio Trujillo of The Instituto de Astrofísica de Canarias in Spain – commented that:

The Hubble data revealing the ghost light are important steps forward in understanding the evolution of galaxy clusters.

Read more about Abell 2744 from NASA