A shooting star and a “new” star, or nova. The shooting star is space dust. And the nova is an explosion on an old star. Check out this photo by Colin Legg of Australia. 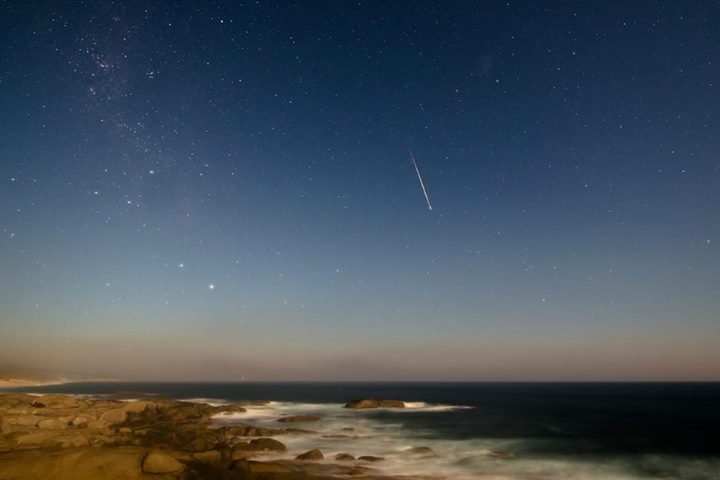 Geminid meteor and Nova Centauri on the night of December 13-14, 2013 by Colin Legg in Australia. View more photos by Colin Legg on his Facebook page.

Geologist and astrophotographer Colin Legg captured this photo of a shooting star – part of the Geminid meteor shower – and a “new” star or nova. He wrote on December 14:

December 13-14 mark[ed] the peak of the Geminid meteor shower. Best viewing time in the southern hemisphere between midnight and dawn. This years peak coincides with a near full moon. Normally that is a downer for meteor viewing. However, Geminids often contain fireballs and they are often bright enough to shine through, moon or not. Last night I captured a fireball while the moon was still quite high, around 11 minutes after midnight.

Also visible to the naked eye in full moonlight is Nova Centauri. A new star that appeared only a week or so ago, it now shines at mag 3.7 and is located directly left of the top pointer (Beta Centauri) in the image attached. The nova is the due to a massive nuclear explosion on a white dwarf star.

By the way, Colin said experienced sky observers are now placing the brightness of Nova Centauri at around magnitude 3.4 to 3.5. That places the nova at #16 in the all-time nova brightness list, and it makes Nova Centauri the 2nd brightest since 1975. This Astronomy Picture of the Day can help you see which of these stars in the photo above is Nova Centauri.

Everything you need to know: Geminid meteor shower