This galaxy is so small and secluded that it may never have interacted with any other Local Group galaxy — or perhaps any other galaxy in the universe. 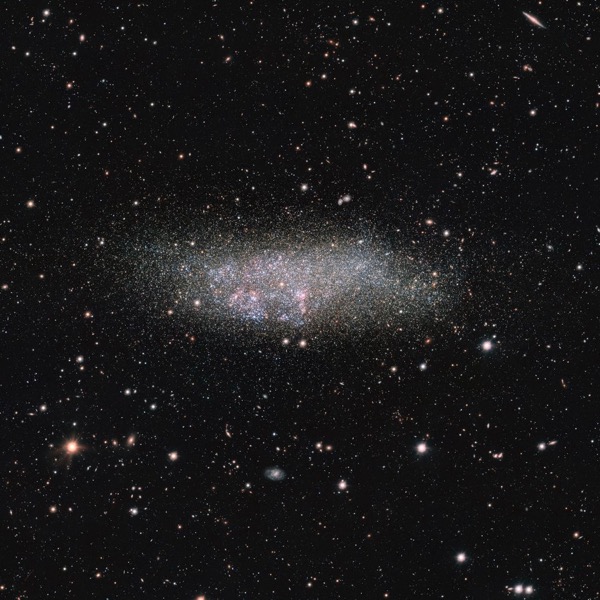 The small galaxy Wolf-Lundmark-Melotte – located at the edge of our Local Group of galaxies – via the OmegaCAM on the VLT Survey Telescope of the European Southern Observatory.

Here’s an obscure member of our Local Group, the collection of a few dozen galaxies n which our Milky Way and the Andromeda galaxy are the largest members. This little galaxy is called Wolf-Lundmark-Melotte, or WLM for short. It’s at the Local Group’s outer edges and is one of its most remote members. Astronomers said earlier today (March 23, 2016) that this galaxy is so small and secluded that it may never have interacted with any other Local Group galaxy — or perhaps any other galaxy of the universe. A statement from the European Southern Observatory said:

Rather like an uncontacted tribe living deep in the Amazon rainforest or on an island in Oceania, WLM offers a rare insight into the primordial nature of galaxies that have been little disturbed by their environment …

Astronomers think that comparatively small primeval galaxies gravitationally interacted with each other and in many cases merged, building up into larger composite galaxies.

Over billions of years, this merging process assembled the large spiral and elliptical galaxies that now appear to be common in the modern universe. Galaxies congregating in this manner is similar to the way in which human populations have shifted over thousands of years and intermixed into larger settlements, eventually giving rise to today’s megacities.

WLM has instead developed on its own, away from the influence of other galaxies and their stellar populations. Accordingly, like a hidden human population with limited contact with outsiders, WLM represents a relatively unperturbed ‘state of nature,’ where any changes occurring over its lifetime have taken place largely independent of activity elsewhere.

Read more about Wolf-Lundmark-Melotte via ESO

Bottom line: New image from the European Southern Observatory of the galaxy known as Wolf-Lundmark-Melotte, or WLM for short. It’s small and secluded and may not ever have interacted with any other Local Group galaxy – or perhaps any other galaxy in the universe.