A spiral galaxy, also known as M106, about 23 million light years from Earth. 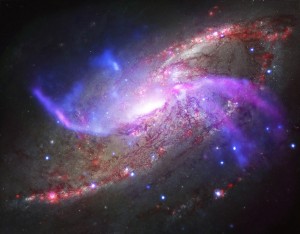 NGC 4258 is a spiral galaxy well known to astronomers for having two so-called anomalous arms that glow in X-ray, optical, and radio light. Rather than being aligned with the plane of the galaxy, they intersect with it. This composite image of NGC 4258 shows the galaxy in X-rays from Chandra (blue), radio waves from the VLA (purple), optical data from Hubble (yellow and blue), and infrared with Spitzer (red). Researchers are using all of these telescopes to better understand how the supermassive black hole is affecting the galaxy and its anomalous arms.

Thank you! Your submission has been received!
Oops! Something went wrong while submitting the form.
END_OF_DOCUMENT_TOKEN_TO_BE_REPLACED