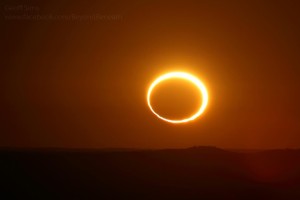 Annular solar eclipse – called a “ring of fire” eclipse – captured by photographer Geoff Sims on May 10, 2013. Used with permission. Visit Geoff’s page on Facebook: Beyond the Skies, Beneath the Seas.

Thank you! Your submission has been received!
Oops! Something went wrong while submitting the form.
END_OF_DOCUMENT_TOKEN_TO_BE_REPLACED