This bird is a superstar

Fewer than 100 pairs of Spoon-billed Sandpipers remain in the wild. Their migration is long and arduous. This is the first hand-reared bird that’s returned to breed. 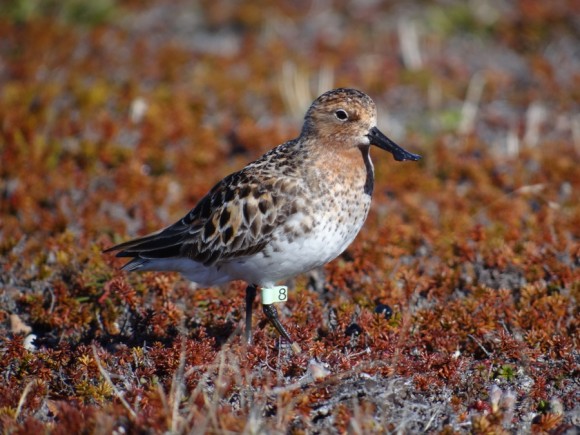 The Spoon-billed Sandpiper is one of the rarest birds in the world. The bird in the image above has now become the first of a group of hand-reared birds in a special program to return to breed. The bird returned to Chukotka, Russia, where it was hatched two years ago.

Saving-Spoon-billed-Sandpiper.com tells the history of this bird:

… it is likely that fewer than 100 pairs remain in the wild.

WWT aviculturist Roland Digby has reared 24 Spoon-billed Sandpipers over the last two summers on their breeding grounds in northeastern Russia, giving them a head start to ensure they survived their crucial first days of life.

Once released, the birds migrated 5,000 miles to south Asia, facing exhaustion, starvation and illegal hunting along the way. There has been a two-year wait to see if any will survive to return to breed.

Now one of the group has been seen back at its birthplace by researchers from Birds Russia, Pavel Tomkovich and Egor Loktionov. They reported that the bird is looking heavy, indicating that she is a female carrying eggs and ready to breed for the first time.

Two years ago I attached a tiny plastic leg flag to this bird, so that we’d recognize it if it was ever seen again. The odds were severely stacked against that happening, but amazingly she was spotted, first by birdwatchers in Taiwan in April and then we see her here at her birthplace ready to have young of her own.

It’s a wonderful accomplishment by the people trying to save this bird from extinction. Congratulations to all.

Read more about this bird and its momentous return to breed from Saving-Spoon-billed-Sandpiper.com