Fireflies are back, upstate New York

Photo and report from an EarthSky friend who regularly watches for them. 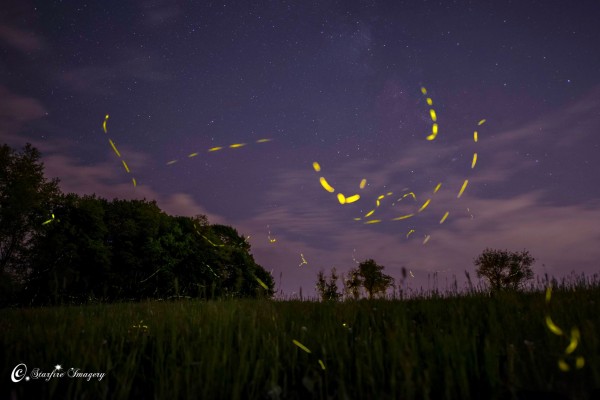 Here’s the first firefly photo we’ve seen so far this year. Matt Pollock in the town of Brunswick in upstate New York posted it at EarthSky Facebook this week (May 27, 2015). He wrote:

Each year as part of my planned outings I include the return of the fireflies. It seems they have come early this year and in great abundance. Last night it never dropped much below 70 degrees F and hot nights in deep grass is their favorite breeding time and place. Typically, the females climb up on the tips of the grass and signal to the males who search around in roving packs from above. I think I learned something interesting last night. When its windy, The males fly low when going upwind, then climb rapidly and let the wind cast them over the grass tops as they search for their mates. If they see one flashing, they drop like a meteor then hover (often in groups) and signal to the ladies below.

I set up my camera low to the ground, just above the grass tops and ran a time lapse. Each time the camera took a picture, the green LED would flash a few times indicating it was taking another photograph. At one point, I think a group saw this and decided to check it out. As I sat in the grass a few feet away, a cluster of them upwind from the setup suddenly rose and dive bombed the camera. Some of them actually came within inches of the lens.

I had the Fstop set for F/2.8 and focused at infinity at a focal length of 24mm with the hopes of catching the core of the Milky Way so the depth of field was fairly narrow and and field of view fairly wide. As can be seen they came in close enough to be pretty blurry and large considering that even something close to the lens is smaller than normal.

As is often the case, the cloud cover prevented any capture of galactic core, but for a brief interval you could see Sagittarius and the “Teapot” asterism which looked almost like lightning bolts coming out of its center. Next time I will pick the midpoint for focus but overall I am pleased with what I got. I thoroughly enjoyed being out there and watching the annual show and will be looking for more of them until the fields are cut and they move on again until next year.

By the way, fireflies have an organic compound in their abdomens called luciferin. As air rushes into the abdomen, a chemical reaction gives off the firefly’s familiar glow. Read more: Why do fireflies light up?

Participate in the Museum of Science Firefly Watch