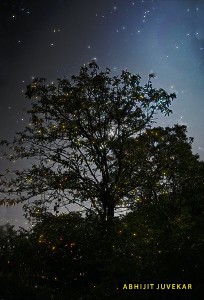 Fireflies & Stars.
A jungle full of fireflies, few trees like this were really filled up with hundreds of fireflies in small area.
They displayed a synchronized light pattern a mating time where males put up the light show to attract females.

The moonlit forest added the fill light while the stars in background completed the frame to witness this most dramatic scene.

Thank you! Your submission has been received!
Oops! Something went wrong while submitting the form.
END_OF_DOCUMENT_TOKEN_TO_BE_REPLACED