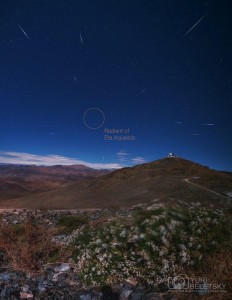 Eta Aquarids meteor shower 2015 from Atacama desert.
Yes, two nights ago we managed to observe the maximum of Eta Aquarids meteor shower from Atacama desert in Chile. I took a series of images and here is the final result. Despite very bright Moon meteors were noticeable.
On the foreground you can see domes of 6.5-m Magellan telescopes, as well as amazingly large amount of vegetation (it appeared after heavy rains in Atacama desert in March). The wind during the night was very strong (up to 35 mph, ~15 m/s) – the foreground flowers on the image are completely blurred due to that effect. After all clouds covered all the sky and we were just lucky to capture the event

Thank you! Your submission has been received!
Oops! Something went wrong while submitting the form.
END_OF_DOCUMENT_TOKEN_TO_BE_REPLACED