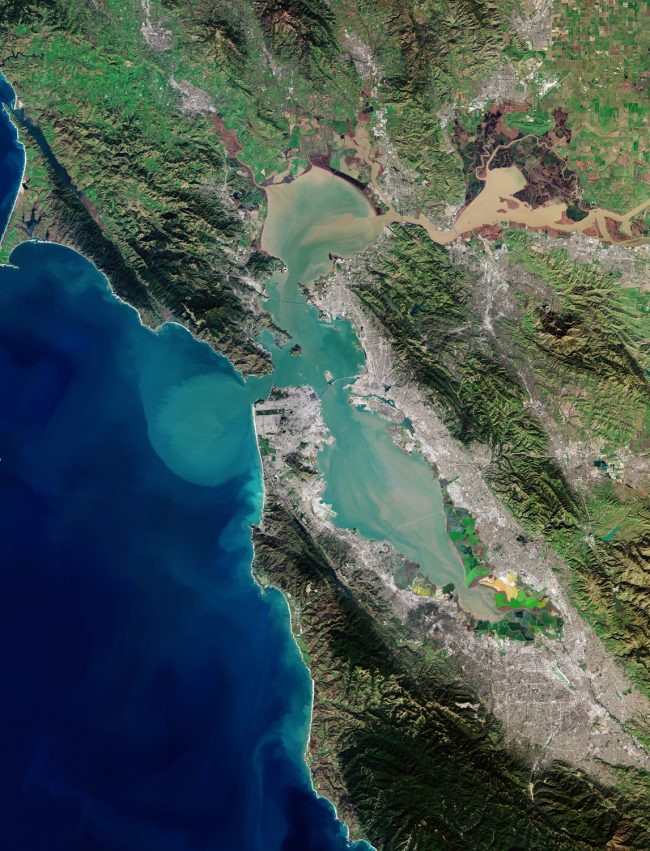 View larger. | In the larger view, you can see Golden Gate Bridge, 1.7 miles long (2.7 km long). It’s visible crossing the opening of the bay into the Pacific Ocean between Marin County and the city of San Francisco (at the tip of the southern peninsula in the center of the image). Image via ESA.

We thought many of you would enjoy these two images from space of one of Earth’s most captivating places: San Francisco Bay.

The European Space Agency (ESA) shared the image above on May 15, 2020. It’s a view of San Francisco Bay from the Copernicus Sentinel-2 mission, which consists of twin Earth-observing satellites launched in 2015. They routinely acquire beautiful optical imagery of Earth; see more here. In describing the image above, ESA wrote that San Francisco Bay is:

… almost 100 km [60 miles] in length – a shallow estuary surrounded by the San Francisco Bay Area – an extensive metropolitan region that is dominated by large cities such as San Francisco, Oakland and San Jose. The densely populated urban areas around the bay contrast strongly with the surrounding green forest and park areas.

In the upper right of the image, the delta of the Sacramento and San Joaquin rivers is visible – with the brown, sediment-filled water flowing down into San Pablo Bay. Here, the murky waters mix before flowing into the larger bay area, which is connected to the Pacific Ocean via the Golden Gate strait. A large sediment plume can be seen traveling westward into the Pacific in the left of the image.

The Golden Gate Bridge, around 2.7 km long [1.7 miles], is visible crossing the opening of the bay into the Pacific Ocean between Marin County and the city of San Francisco – which can be seen at the tip of the southern peninsula in the center of the image. Treasure, Angel and Alcatraz islands can be seen sticking out of the waters of the bay, with several bridges connecting its east and west shores. Several boats are also visible …

Read more about this image from ESA.

Since some of its earliest missions, astronauts traveling aboard the International Space Station (ISS) have also been tempted to capture the beauty of San Francisco Bay. The image below is from ISS Expedition 4 (December 2001 to June 2002; the current mission is Expedition 63). NASA wrote of the image below:

This view featuring the San Francisco Bay Area was photographed by an Expedition 4 crewmember onboard the International Space Station. The gray urban footprint of San Francisco, Oakland, San Jose, and their surrounding suburbs contrasts strongly with the green hillsides. Pacific Ocean water patterns are highlighted in the sun glint. Sets of internal waves traveling east impinge on the coastline south of San Francisco. At the same time, fresher bay water flows out from the bay beneath the Golden Gate Bridge, creating a large plume traveling westward. Tidal current channels suggest the tidal flow deep in the bay. 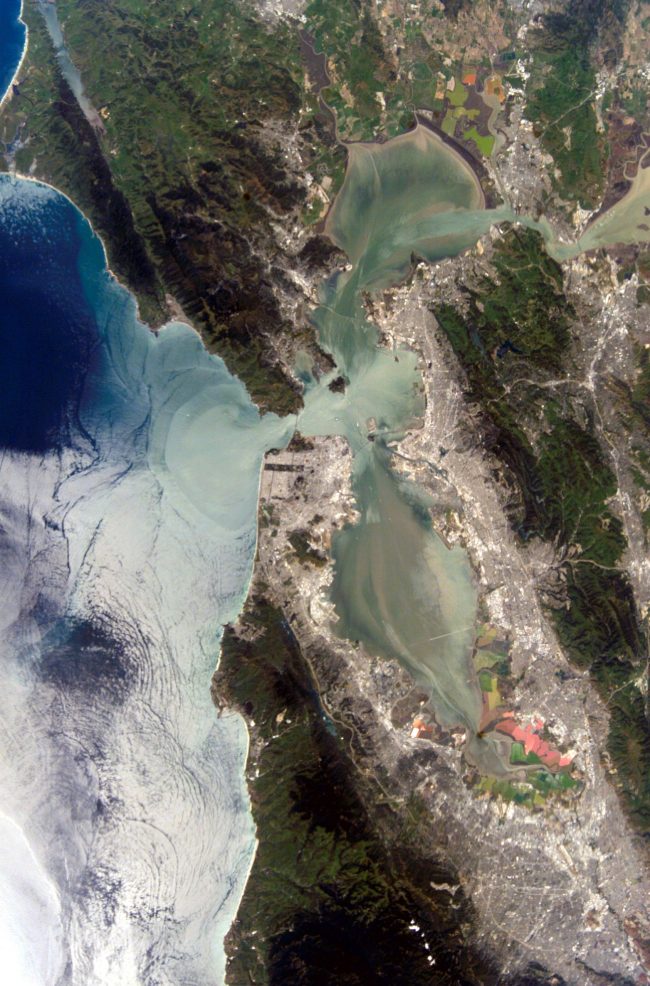 Bottom line: A beautiful image of San Francisco Bay via ESA’s Copernicus Sentinel-2 mission, plus another view from the ISS.