The Cassini spacecraft has been orbiting Saturn since 2004. It captured this image of Earth, seen through Saturn’s rings, in 2006, from nearly a billion miles away. 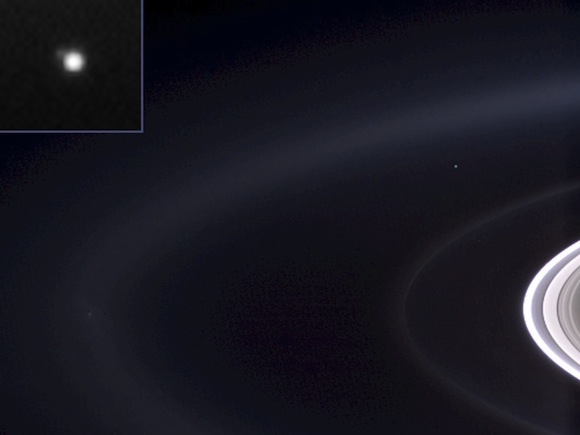 This image is known as the Pale Blue Orb. It’s Earth, as seen through the rings of Saturn. The Cassini spacecraft, orbiting Saturn, captured it in 2006. Image via NASA/JPL/Space Science Institute.

This image – called the Pale Blue Orb – was made possible by the passing of Saturn directly in front of the sun as seen from the Saturn-orbiting Cassini spacecraft. A similar geometry between the Earth, the sun and the Cassini spacecraft will let Cassini take another image of Earth today (July 19, 2013). It’ll be only the third such image of Earth ever to be acquired from the outer solar system. More about the July 19 photo, and see the other photo of Earth from the outer solar system, here.

NASA’s Cassini spacecraft will be photographing Earth through the rings of Saturn today – Friday, July 19, 2013 – and, if you’re in the Americas you can join the shot. Learn more about the first interplanetary photobomb here.

More info on joining the first interplanetary photobomb on July 19