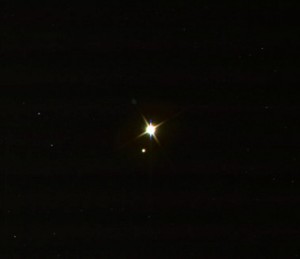 The image above is a color-composite made from raw images acquired by Cassini in red, green, and blue visible light wavelengths. Some of the specks around the edges are background stars, and others are the result of high-energy particle noise, of which some have been digitally removed.
The Moon is the bright dot just below and to the left of Earth. (An original raw image (green filter) can be seen here.)

Thank you! Your submission has been received!
Oops! Something went wrong while submitting the form.
END_OF_DOCUMENT_TOKEN_TO_BE_REPLACED