Do your skies look hazy? Are your sunsets very orange, or layered-looking, or does the sun or moon look orange while high in the sky? If you’re in the northern U.S. or Canada, the reason is still wildfire smoke. 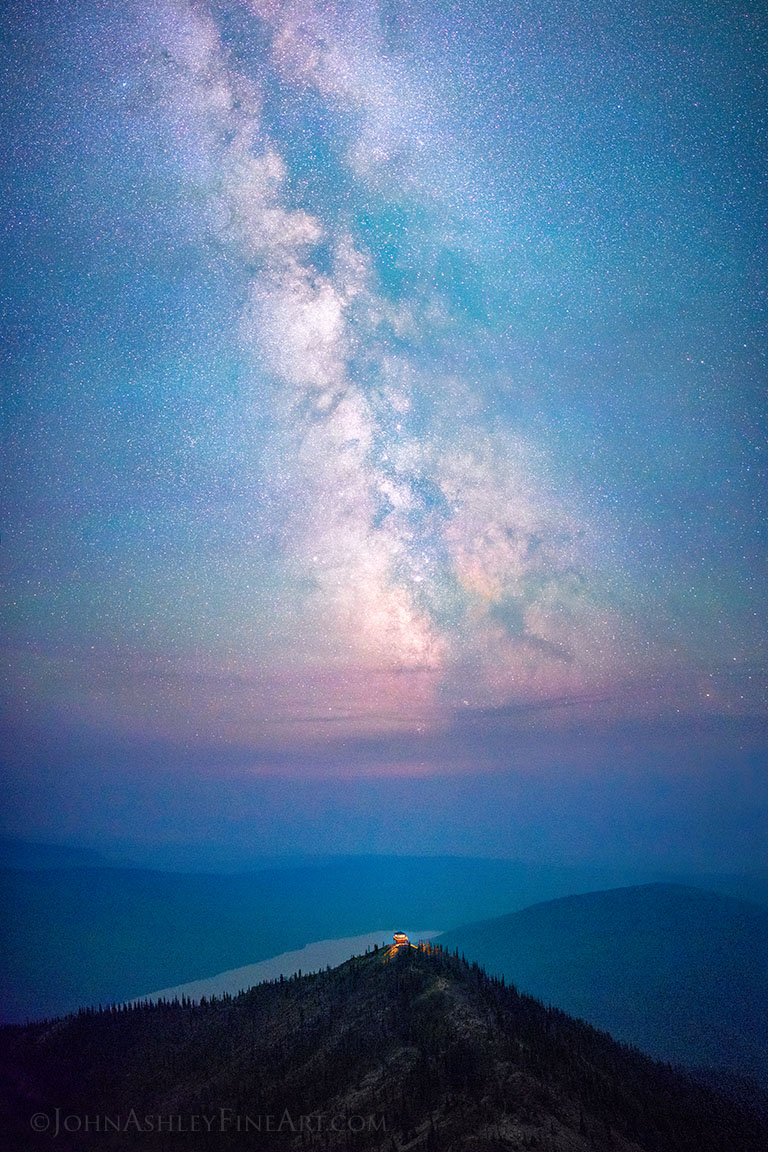 John Ashley in Glacier National Park, Montana, wrote: “The August Milky Way fades behind forest fire smoke surrounding the Numa fire lookout and Bowman Lake … Smoke from forest fires in Montana and around the Pacific Northwest is blanketing a number of states and provinces across North America.”

This week, wildfire smoke continues to drift across much of North America, manifesting as hazy skies and vivid sunsets. Especially in the northern U.S. and Canada, people are speaking of skies that look odd, or of being able to see smoke when looking off in the distance, or, perhaps most noticeably, seeing strangely orange suns or moons high in the sky. Some cities on the U.S. West Coast apparently got a few days reprieve from the smoke when winds from the Pacific blew inland, but it’s back there now as reported by KIRO 7 News in Seattle, which posted the video below on Facebook on August 19, 2018: 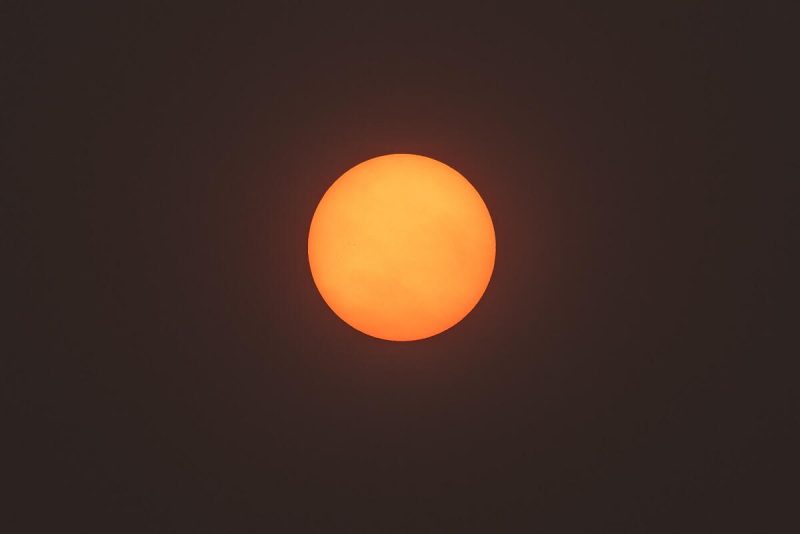 Three weeks on the Washington coast and this is the closest we’ve come to seeing a sunset. Even out here at what feels like the edge of the earth (and actually is the edge of the country) there is no escaping the smoke. https://t.co/crGvFSIu41 | pic.twitter.com/cBpbRzPHoP

Who can see smoky skies, and how can you see them? The smoke is densest and most bothersome in the northwestern U.S. and southwestern Canada, where the most fires are burning, but everyone across the northern U.S. can look up, all day long, toward smoky skies. I was in Minneapolis over the weekend, and the skies looked very smoky to me, relatively speaking, as someone coming from a southern state, where skies are clearer. Some people appeared not to notice the smoke, but others commented on days that looked “eerie” or even “apocalyptic” due to smoke. Flying back southward yesterday, peering out an airplane window, it was possible to see the skies steadily clearing. The smoke is most noticeable in the mornings, as the sun climbs eastward into the sky, or in late afternoon to evening, when many can see an orange sun long after sunrise, or before the true sunset begins. 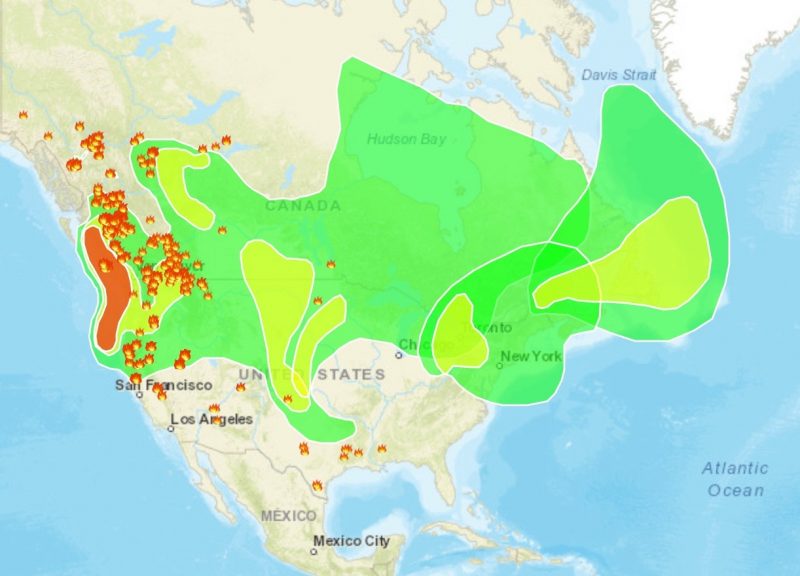 This is the Hazard Mapping System Fire and Smoke analysis from the National Oceanic and Atmospheric Administration (NOAA) for August 20, 2018. Read more about this image. 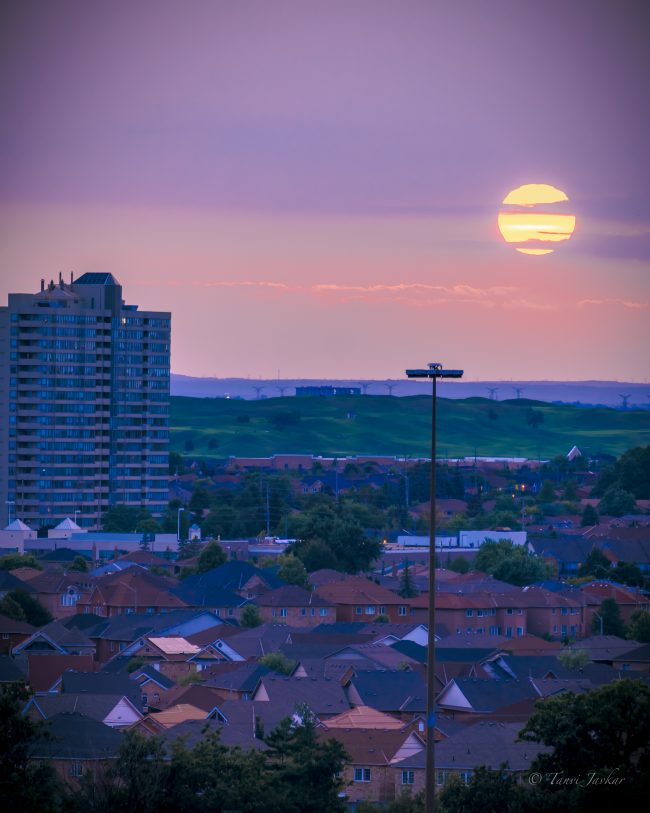 Tanvi Javkar, in Mississauga in the Canadian province of Ontario, wrote on August 19, 2018: “Vivid sunsets these days are due to the smoke from wildfires in British Columbia.”

Joy Dee posted the video below to EarthSky Facebook on August 17. She wrote:

Here’s a surreal example of the sunsets we are experiencing here in Calgary, Alberta. Caused by the plume of forest fire smoke blowing east, across our sky, from British Columbia. 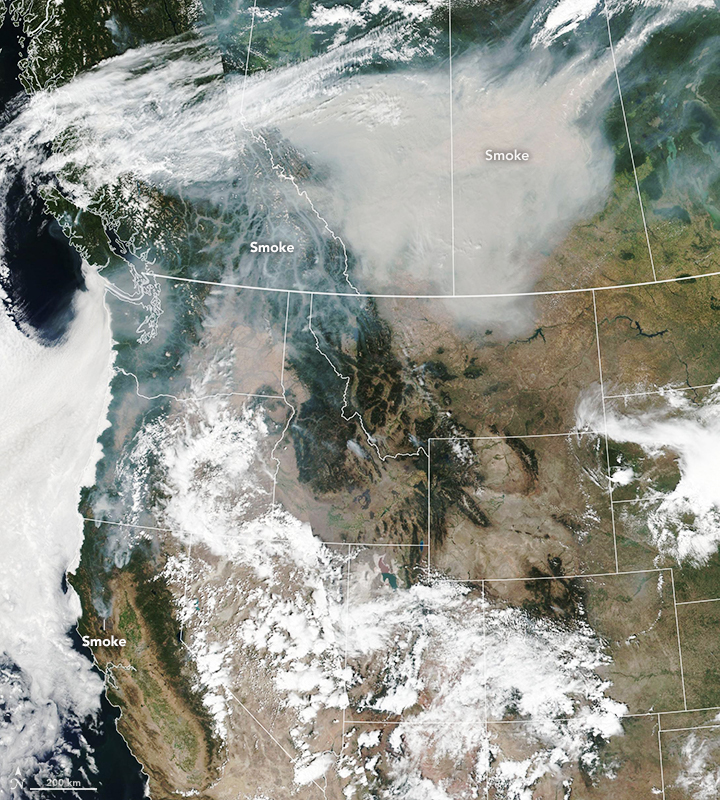 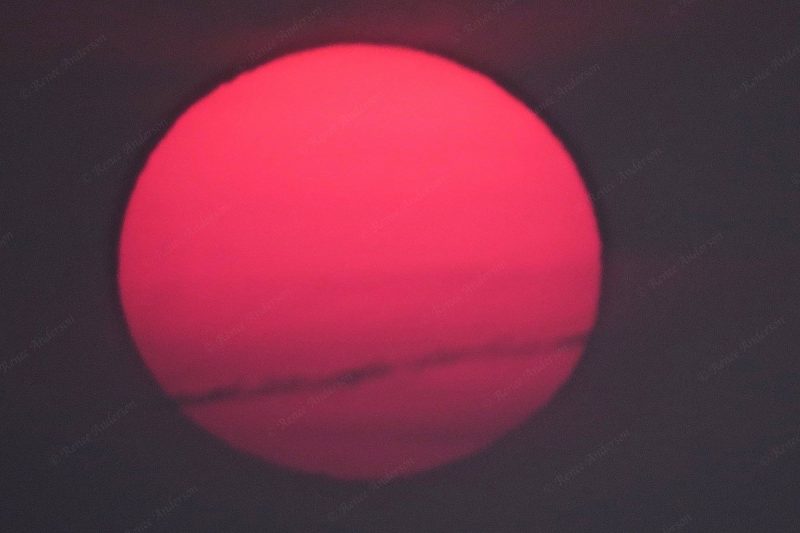 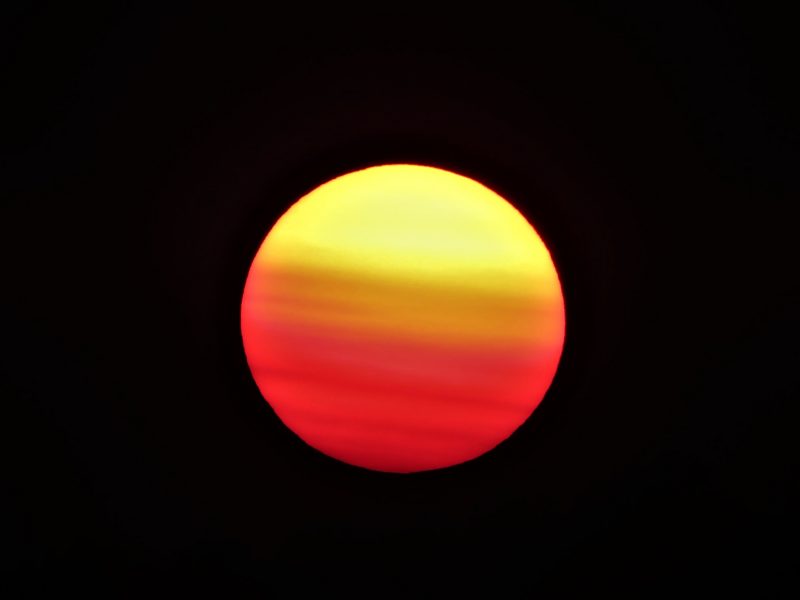 Don Spain in Hillview, Kentucky, wrote on August 13, 2018: “Sunset tonight. No filters were used for this image.”

Last week, I asked Les Cowley of the great website Atmospheric Optics if his site has an entry on unusual sunsets caused by wildfire smoke. I thought it might, being the world’s go-to source for all sky optics questions, ranging, literally, from anticrepuscular rays seen from aircraft to white rainbows (fogbows). Les answered:

I don’t have anything on my site about sunsets that appear affected by the smoke from the forest fires. I suppose that until the last decade or so it was not that frequent near populated areas.

On the up side, Les said, this is a great opportunity to look for blue moons and suns. They’re not to be confused with the sorts of Blue Moons that aren’t related to color, but which are Blue Moons in name only. There are, indeed, also actual blue-colored moons and/or blue-colored suns that can be seen when wildfire smoke fills the air, if, as Les explained:

… the smoke particles are in a narrow size range of one to a few microns across. Then they scatter light in a way that filters out red and green to leave a truly blue moon or sun.

Needless to say, blue-colored moons and suns are rare.

So, if you’re in North America, keep watching your skies for smoke! 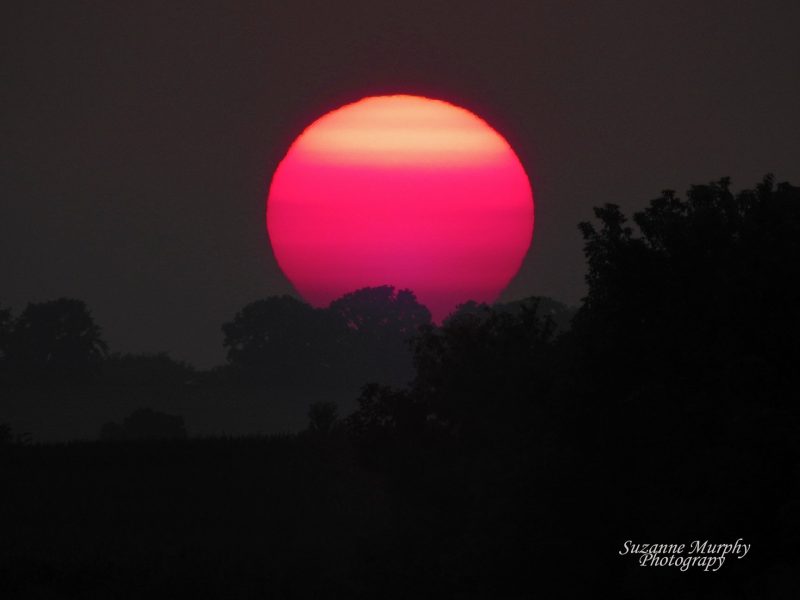 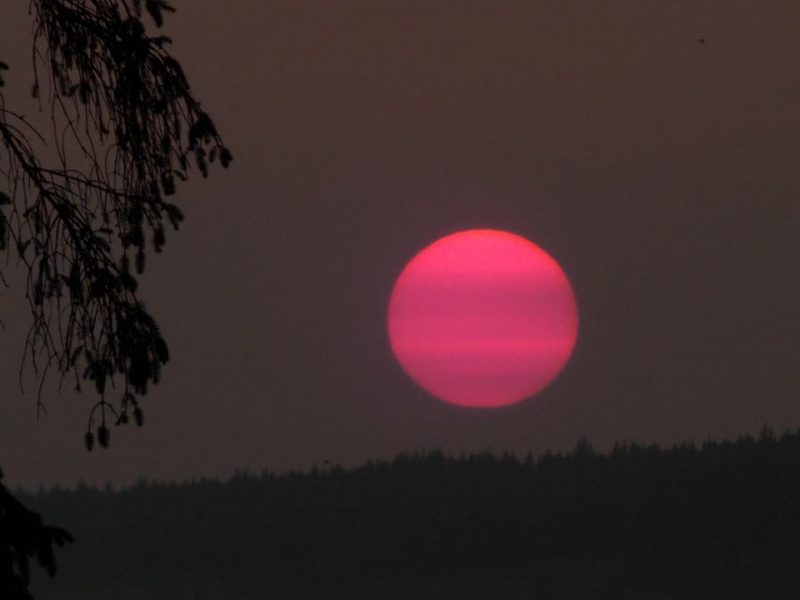 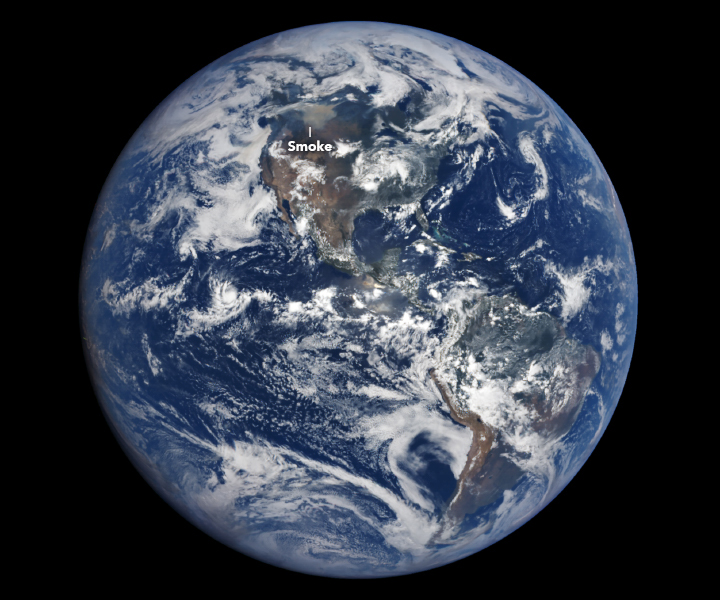 The smoke from Canadian fires was so pronounced it was visible from a distance of about a million miles (1.5 million km) on August 15, 2018. Image via NOAA’s DSCOVR satellite. Read more about this image from NASA Earth Observatory.

Bottom line: If you’re in North America, watch your sunsets and sunrises. They might look unusual due to smoke from the raging wildfires in the western part of the continent.