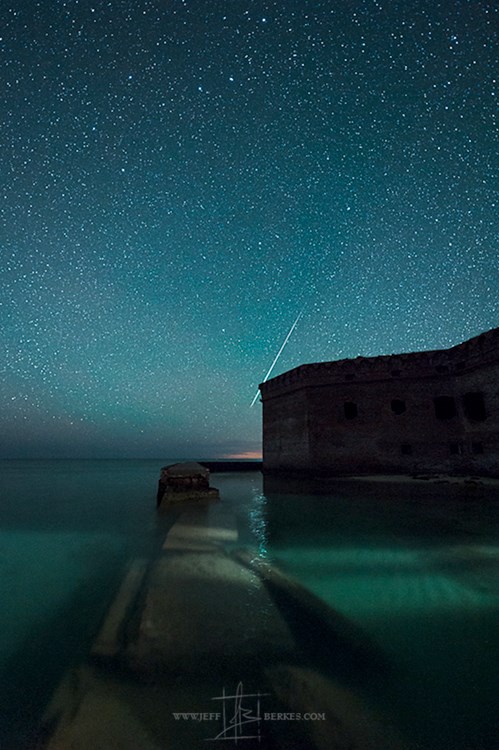 Jeff Berkes captured this fireball – a very bright meteor – at Dry Tortugas National Park in the Florida Keys last Sunday (April 22, 2018) during the peak of the Lyrid meteor shower.

The park – accessible only by seaplane or boat – is noted for abundant sea life, tropical bird-watching, and colorful coral reefs. The park’s centerpiece is Fort Jefferson, a massive but unfinished coastal fortress, the largest brick masonry structure in the Western Hemisphere.

I set up my camera overlooking a 40-foot gap in the moat wall at Fort Jefferson facing north to capture some star trails and a Lyrid meteor. The damage to the moat wall was caused by the power of Hurricane Irma in September 2017 … I started a timelapse which lasted 1 hour and 35 minutes. I captured one meteor in all of those shots. I can say that patience came through, as this Lyrid fireball entered the atmosphere towards the end of my timelapse.

The meteor was so bright that it left reflections in the water surrounding the moat.