Rain clouds and a sunset combined to create this beautiful double rainbow over New Mexico. 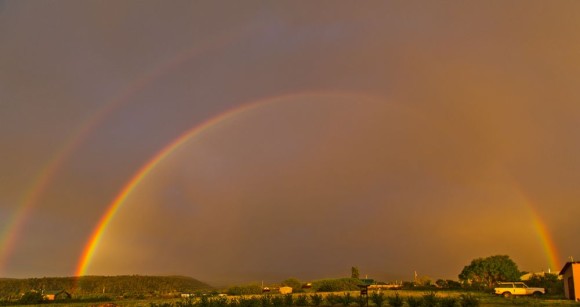 Near sunset, to the east the 13,000-ft Truchas peaks were obscured by rain clouds. However, there was a narrow band of clear sky just above the western horizon. The setting sun was still up in the storm clouds but I anticipated that when it entered the clear area there might be a brief rainbow. For a change I was ready—had the camera ready to go. Bingo, the sun made its brief appearance and produced the attached double rainbow.

Processed the Camera RAW image in Lightroom and CS6 and straightened the tilted buildings (caused by the wide-angle lens) on the right and left edges.?