Day on Pluto, day on Charon

Best currently available images of Pluto and Charon – taken during New Horizons’ flyby – combined to create a view of a full rotation of each of these worlds. 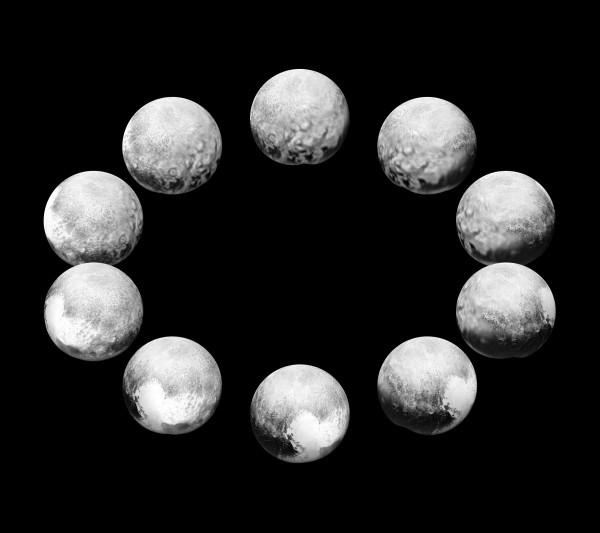 View larger. | The best available images of each side of Pluto taken during New Horizons’ July, 2015 approach were combined to create this view of a full rotation. Images via New Horizons spacecraft, via NASA/Johns Hopkins University Applied Physics Laboratory/Southwest Research Institute.

A day on Pluto is 6.4 Earth-days long. Now – for the first and possibly only time in some of our lifetimes – we have images of Pluto rotating over the course of one full Pluto-day. The composite image above shows Pluto’s rotation. Images are, of course, from NASA’s intrepid New Horizons spacecraft, which swept close through the Pluto system in July, 2015.

New Horizons was able to visit Pluto after several decades of dreaming and planning, and nearly a decade (9.5 years) of travel through space. After all, Pluto was once considered the outpost world of our solar system; now we know there are other objects out there as well, like the Kuiper Belt object 2014 MU69, which New Horizons will visit next. Pluto is about 3 billion miles (5 billion km) from Earth.

So it’s decades and decades to Pluto – nearly a lifetime, certainly an entire career, as New Horizons principle investigator Alan Stern (who was a friend of mine when he was a starry-eyed astronomy undergraduate student and who is now nearly 60) can no doubt tell you. NASA said of the images above:

New Horizons’ Long Range Reconnaissance Imager (LORRI) and the Ralph/Multispectral Visible Imaging Camera as the distance between New Horizons and Pluto decreased from 5 million miles (8 million km) on July 7 to only 400,000 miles (about 645,000 kilometers) on July 13. The more distant images contribute to the view at the 3 o’clock position, with the top of the heart-shaped, informally named Tombaugh Regio slipping out of view and giving way to the side of Pluto that was facing away from New Horizons during closest approach on July 14. The side New Horizons saw in most detail – what the mission team calls the “encounter hemisphere” – is at the 6 o’clock position.

That means some of the images below, though visible to New Horizons, would never be seen from Pluto’s surface. 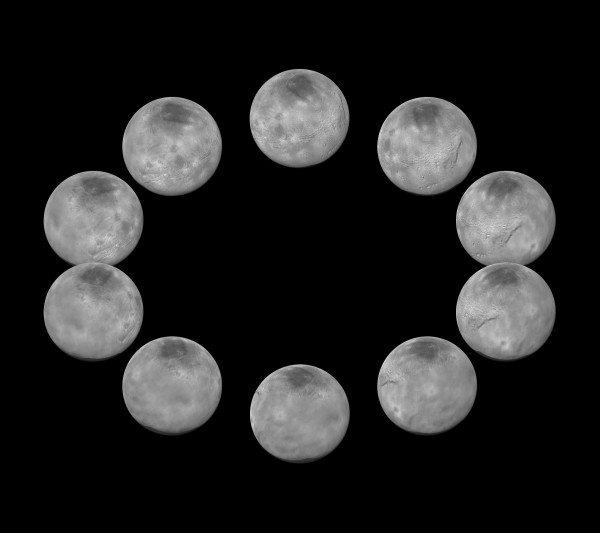 View larger. | The photos were taken by LORRI and Ralph/MVIC from July 7-13, as New Horizons closed in over a range of 6.4 million miles (10.2 million kilometers). The more distant images contribute to the view at the 9 o’clock position, with few of the signature surface features visible, such as the cratered uplands, canyons, or rolling plains of the informally named Vulcan Planum. The side New Horizons saw in most detail, during closest approach on July 14, 2015, is at the 12 o’clock position. Images via New Horizons spacecraft, via NASA/Johns Hopkins University Applied Physics Laboratory/Southwest Research Institute.

Bottom line: Best currently available images of each side of Pluto – and each side of its large moon, Charon – taken during New Horizons’ July, 2015, flyby have been combined to create a view of a full rotation of each of these worlds.