An astronaut aboard the International Space Station captured this photograph of circular farming patterns in Sharq El Owainat in southwestern Egypt. 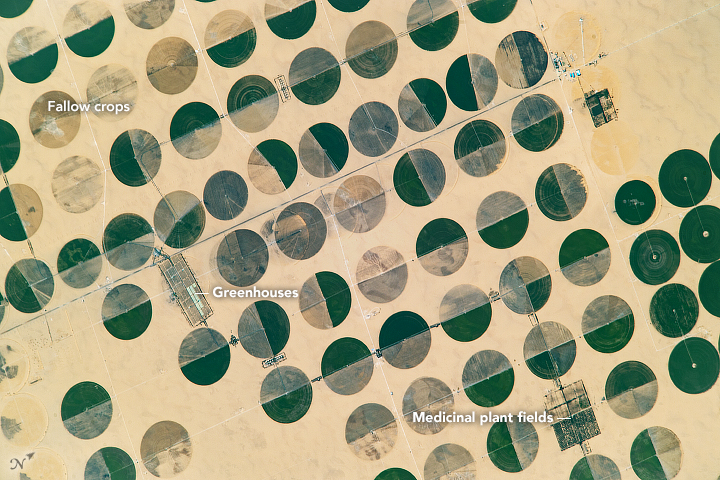 This astronaut photograph was acquired on October 6, 2016. Image via NASA.

Here’s something our agrarian ancestors might have dearly loved to see. It’s an image of crop circles – circular farming patterns – in Sharq El Owainat in southwest Egypt, captured by an astronaut aboard the International Space Station (ISS). NASA Earth Observatory, which published this image on September 18, 2017 wrote:

The Nubian Sandstone Aquifer System, buried beneath the sand, allows patches of agriculture to survive in the middle of the desert. The aquifer is the only source of water for Egyptians living away from the Nile River. More than 95 percent of Egypt is uninhabitable desert with an average annual precipitation of 0 millimeters.

The crop circles are a result of center-pivot irrigation, an efficient method for water conservation in agriculture. Groundwater from the Nubian aquifer is drawn up from wells in the center of the circles, and it is sprayed or dripped out of long, rotating pipes that pivot around the center.

Most of the crops pictured here are likely potatoes (darker green circles), wheat (lighter brown circles), or medicinal and aromatic plants such as chamomile. The light, tan-colored crop circles likely have undergone controlled burning to remove excess plant matter and essentially clean up the land for the next crop. Catering to the populace of the New Valley Governate, these crops are transported on a desert road that leads to Abu Simbel (about 200 miles to the east), Dakhla Oasis (200 miles north), and the Sharq El Owainat Airport.