Saturn’s rings appear to be intersecting in an impossible way. But – in this new Cassini spacecraft image – we’re really just seeing a play of light and shadow. 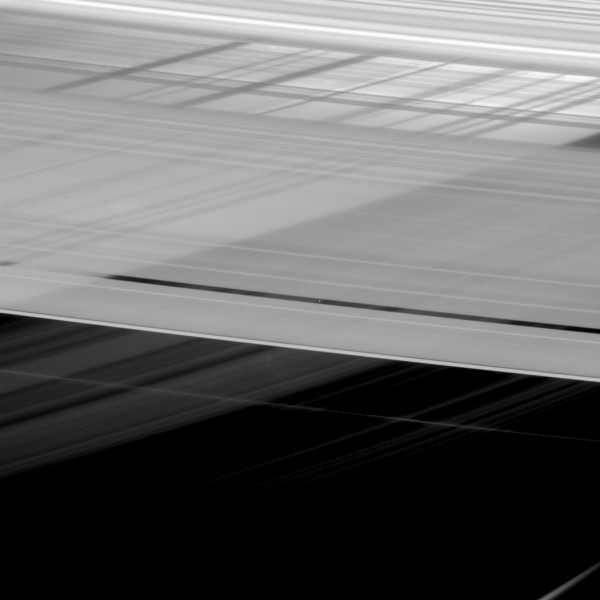 Are Saturn’s rings criss-crossed in this February, 2016, Cassini spacecraft image? No. It’s not a new discovery, just an illusion caused by the fact that Saturn’s rings aren’t solid objects. NASA said:

At first glance, Saturn’s rings appear to be intersecting themselves in an impossible way. In actuality, this view … shows the rings in front of the planet, upon which the shadow of the rings is cast.

Saturn’s rings are composed of millions of tiny moonlets. They aren’t solid; we can see through them. And that’s why we can see the shadow of the rings behind the rings themselves, creating this apparent criss-cross. Speaking of this image, NASA went on to say:

This view looks toward the sunlit side of the rings from about 14 degrees above the ring plane. The image was taken in visible light with the Cassini spacecraft narrow-angle camera on Feb. 11, 2016.

The view was acquired at a distance of approximately 1.2 million miles (1.9 million kilometers) from Pan and at a Sun-Pan-spacecraft, or phase, angle of 85 degrees. Image scale is 6 miles (10 kilometers) per pixel.

Click here to go to the Cassini imaging team homepage