Comet Lovejoy on May 22, 2015. The comet is the brilliant green dot near the center of the photo. At the upper right of the photo is the star Polaris, aka the North Star. 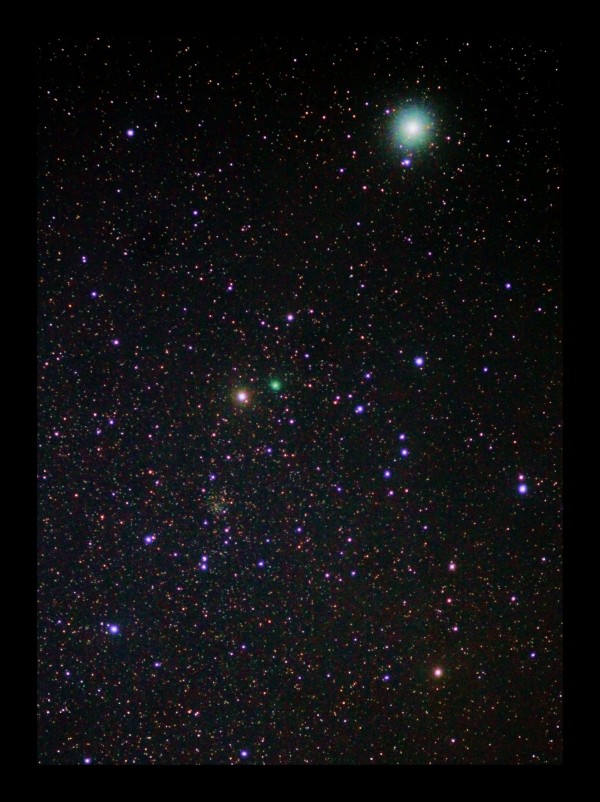 Here is a grand photo of Comet C/2014 Q2 (Lovejoy), which is now in the northern sky, not far from the North Star, Polaris. On May 26, 2015, Stuart Atkinson posted this photo and wrote a great article about how to spot the comet now, at the blog of the Society for Popular Astronomy. Thanks, Stu, for giving us permission to publish your photo here!

Remember Comet Lovejoy from earlier this year? It’s a long-period comet, discovered in August, 2014 by Terry Lovejoy in Australia. It has been prominent in our sky since late 2014 and became briefly visible to the eye in early 2015. Around that time, we received many wonderful photos of this very photogenic object, whose bright greenish color stems from cyanogen and diatomic carbon being burned off the comet as it passes through space.

After January, the comet dropped off the radar for most of us, but experienced sky observers using binoculars and telescopes have been following it ever since. Stuart Atkinson wrote in his May 26 post about Lovejoy:

Lovejoy is fading but is still, remarkably, bright enough to be seen with a pair of binoculars.

It is now drifting serenely up towards Polaris, the Pole Star, and that means it is very easy for even the most inexperienced comet hunter to find: if you know where to find Polaris, you can find Comet Lovejoy as it heads away from Earth and returns to the cold, lonely depths of the outer solar system. It won’t grace our skies again until the year 15382!

Read Stu’s article about Comet Lovejoy, which includes directions for finding it – and helpful charts – here.

Polaris, coincidently, is our Star of the Week. Click here for more about it.

Just for old times’ sake … here’s one of my favorite photos of Comet Lovejoy from late 2014.