The Hubble Space Telescope captured this beautiful image of Comet C/2012 S1 (ISON) on April 10. The comet is now closer to the sun than Jupiter’s orbit. 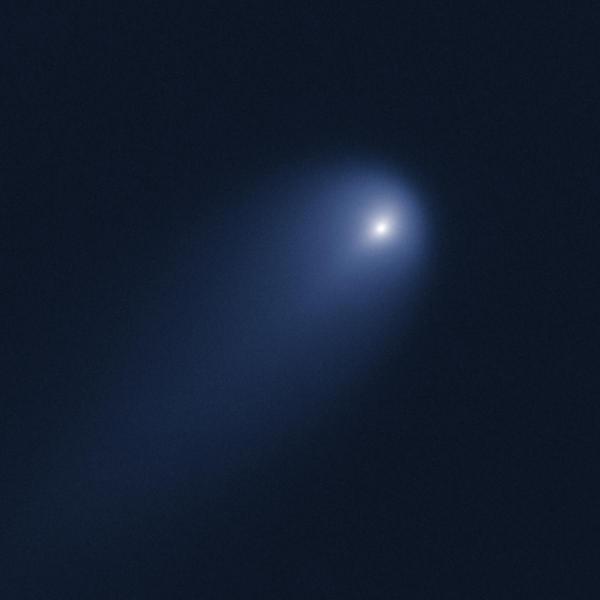 The Hubble Space Telescope captured this image of Comet C/2012 S1 (ISON) on April 10, 2013 when the comet was slightly closer than Jupiter’s orbit at a distance of 386 million miles from the sun (394 million miles from Earth). This comet is expected to put on a spectacular display in Earth’s sky – visible from both the Northern and Southern Hemisphere – in late 2013. It might even become a daytime comet!

According to the Hubble Space Telescope Newscenter:

Even at its current great distance from the Earth and sun, the comet is already active as sunlight warms the surface and causes frozen volatiles to sublimate. A detailed analysis of the dust coma surrounding the solid, icy nucleus reveals a strong jet blasting dust particles off the sunward-facing side of the comet’s nucleus.

Preliminary measurements from the Hubble images suggest that the nucleus of ISON is no larger than three or four miles across. This is remarkably small considering the high level of activity observed in the comet so far, said researchers. Astronomers are using these images to measure the activity level of this comet and constrain the size of the nucleus, in order to predict the comet’s activity when it skims 700,000 miles above the Sun’s roiling surface on November 28.

The comet’s dusty coma, or head of the comet, is approximately 3,100 miles across, or 1.2 times the width of Australia. A dust tail extends more than 57,000 miles, far beyond Hubble’s field of view.

More careful analysis is currently underway to improve these measurements and to predict the possible outcome of the sungrazing perihelion passage of this comet.

This image was taken in visible light with Hubble’s Wide Field Camera 3. The blue false color was added to bring out details in the comet’s structure.

ISON stands for International Scientific Optical Network, a group of observatories in ten countries who have organized to detect, monitor, and track objects in space. ISON is managed by the Keldysh Institute of Applied Mathematics, part of the Russian Academy of Sciences.