It’s setting soon after the sun, but it’s in the same part of the sky as this weekend’s spectacular display of the moon, Venus and Jupiter. 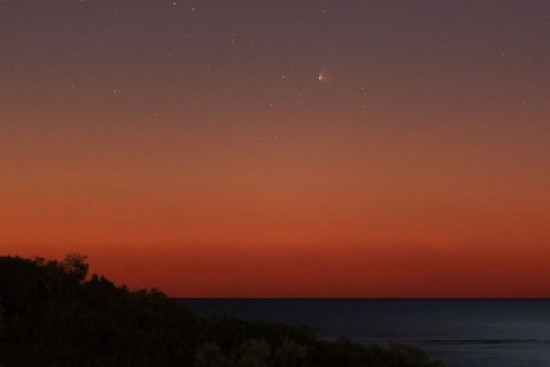 On July 15, 2015, Colin Legg in Australia photographed the comet that’s going to be in the same part of the sky this weekend as the spectacular display of the moon and bright planets Venus and Jupiter. It’s called C/2014 Q1 (PANSTARRS), and if it were in a darker sky, we’d all be rushing out to see it. As it is, the Southern Hemisphere has a better chance of seeing this comet over the next few days as it reaches a maximum brightness. Colin wrote:

A nice little comet is briefly appearing in southern hemisphere skies over the next few days. Last night was the first good night with it setting at astronomical twilight.

Over the next few nights it will climb higher but also fade as it leaves the sun. Friday night it will sit around 1/2 way between the moon and Jupiter. Best seen between 6:40 and 7 pm. Saturday night it will be around 3 degrees below and slightly left of the moon. Best seen in binoculars.

Colin said he only saw the comet in binoculars, by the way, and that twilight was too bright to view it with the unaided eye. He said he was going to try to capture the comet near the moon this weekend, so stay tuned! He also provided this (somewhat rough) image showing the tail of the comet in more detail. Thank you, Colin! 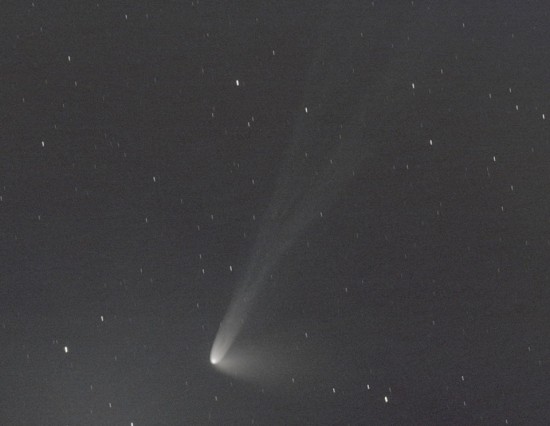 The comet passed perihelion – its closest point to the sun – on July 6. Its current magnitude is 4, within the limit for visibility with the unaided eye. But it’s against a background of bright twilight and thus very, very difficult to see, especially from the Northern Hemisphere. It’s just above the treetops at sunset and quickly follows the sun below the western horizon.

View larger. | Comet PanSTARRS (C/2014 Q1) hugs the horizon for northern hemisphere observers and will be a difficult catch the next few nights. This map shows the sky facing west from Minneapolis, Minnesota (45° north), one hour after sunset on July 9 (10 p.m. CDT). Stars shown to mag. +6. Although the map seems to show the comet’s altitude peaking around the 16th, it will actually be below the horizon at that time because of the seasonal drift of the stars. Chart and caption via skyandtelescope.com 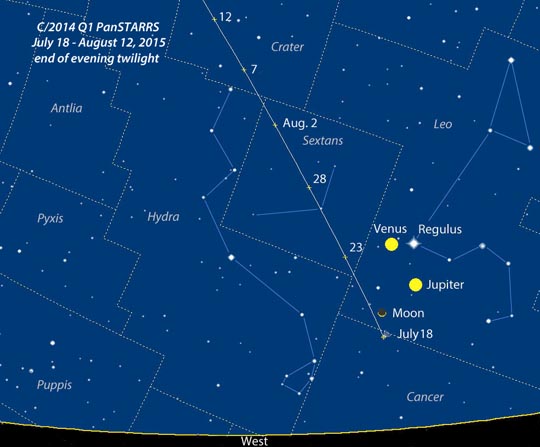 View larger. | Comet C/2014 Q1 PanSTARRS is now best seen from the southern hemisphere (Alice Springs, Australia here) during the winter months of July and August. On July 18th (shown here) the comet joins the crescent Moon, Jupiter, and Venus for a scenic gathering in the west at nightfall. Stars to magnitude 6. Click for large version. Chris Marriott’s SkyMap software . Chart and caption via skyandtelescope.com 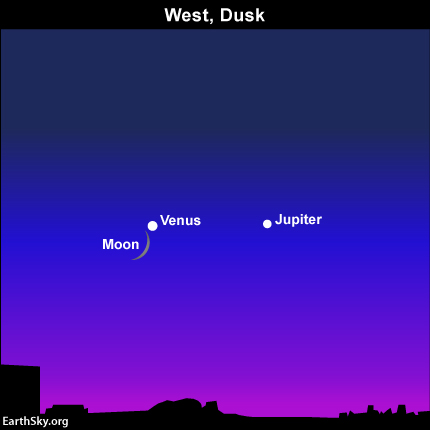 Bottom line: If Comet C/2014 Q1 (PANSTARRS) were in a darker sky, we’d all be rushing out to see it. As it is, Southern Hemisphere observers might catch it over the next few days, in the same part of the sky as this weekend’s spectacular display of the moon, Venus and Jupiter.