A coronal mass ejection (CME) erupted from the sun’s far side on August 20. At nearly the same time, a small sun-diving comet met its end.

As the discussion about large sun-diving Comet ISON heats up, take a look at a very small sun-diving comet that apparently made its final plunge into the sun yesterday (August 20, 2013). The comet appears in the lower right of this animation and makes its way toward the sun, vaporizing as it gets closer. This small comet, thought to be only a few tens of meters across, did not survive its close encounter with the sun and was not seen again afterwards.

What’s more, just hours before the comet arrived near the sun, a coronal mass ejection (CME) erupted from the sun’s far side.

Busy day on the sun, in other words, as seen via our earthly technologies. ESA and NASA’s SOHO (Solar and Heliospheric Observatory) captured the images on this page. This spacecraft is in a halo orbit around a sun–Earth Lagrangian (L1) point, that is, a relatively stable orbital position between the Earth and the sun. It transmits a continuous data stream of photographs and other measurements to scientists on Earth. The data are used to help predict solar flares, so that electrical grids on Earth, and Earth-orbiting satellites, can be protected from the damaging effects of incoming solar particles hurtled to space by CMEs.

The great website spacewather.com had this to say about the comet that met its fiery demise in the sun yesterday:

The comet, R.I.P., was a member of the Kreutz family. Kreutz sungrazers are fragments from the breakup of a single giant comet many centuries ago. They get their name from 19th century German astronomer Heinrich Kreutz, who studied them in detail. Several Kreutz fragments pass by the sun and disintegrate every day. Most, measuring less than a few meters across, are too small to see, but occasionally a bigger fragment like this one attracts attention.

In contrast to this small comet, whose nucleus may have measured only a few tens of meters across, large sun-diving Comet ISON is thought to be more like 3 miles (5 kilometers) in diameter. 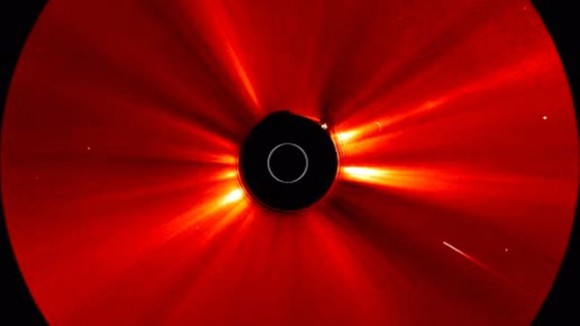 Image via ESA and NASA’s SOHO (Solar and Heliospheric Observatory)

Bottom line: Photos and animation of the CME and small sun-diving comet seen on August 20, 2013 by SOHO.