This beautiful and unusual cloud pattern – captured by a NASA satellite – was caused by a phenomenon called “gravity waves.” 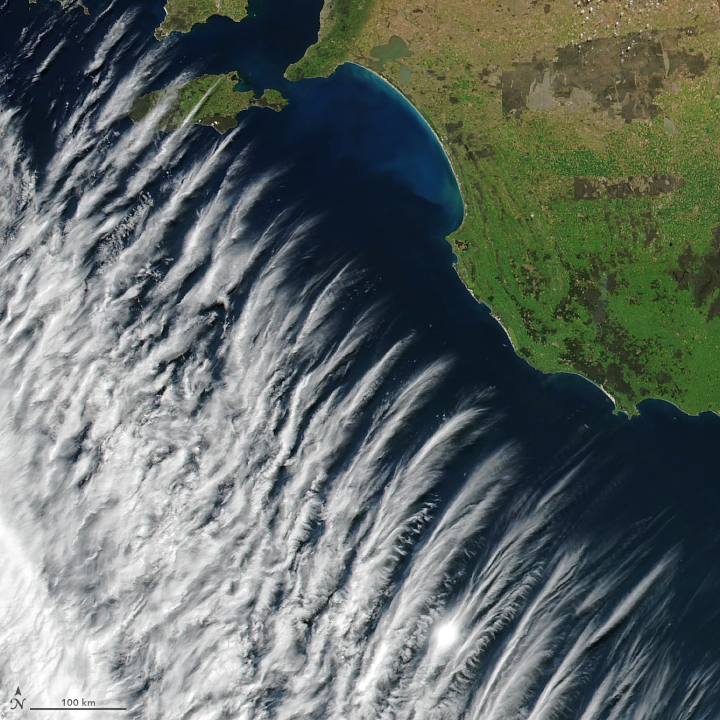 On October 17, 2017, NASA’s Suomi NPP satellite captured this image of an unusual cloud pattern off the coast of southern Australia.

According to Paul Lainio, a meteorologist at Australia’s Bureau of Meteorology, the pattern was caused by a phenomenon in the atmosphere called gravity waves. Similar to a boat’s wake, which forms as water is pushed upward by the boat and pulled downward again by gravity, these clouds are formed by the rise and fall of air columns. As the wave moves along the cloud band, the wave peaks appear cloudy and the troughs appear cloud-free. In this case, the gravity waves developed as a result of instability on the flank of a strong jet stream moving ahead of the cold front. Lainio said:

This type of effect is relatively unusual since it requires a strong anticyclonic-curved jet that develops gravity waves of sufficient magnitude. The gravity waves are the atmosphere’s way of restoring balance, and they usually don’t last for lengthy periods.