Choppy waters in Lake Michigan, the windy city Chicago, and a sunset. 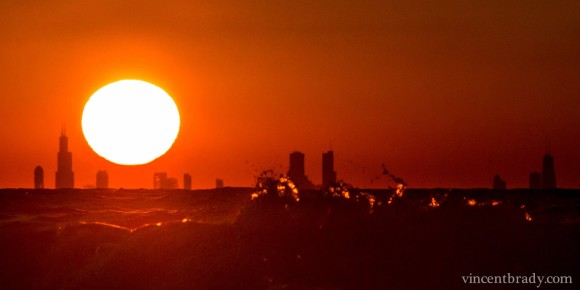 Vincent Brady captured this magnificent distant view of the city of Chicago – often called the Windy City – with the choppy waters of Lake Michigan, at sunset, in the foreground. Vincent said:

As viewed from Indiana Dunes State Park [on July 24, 2013]. I’ve been watching for a good time to shoot the sunset behind Chicago as it happens for a few days in May and a few more in July. The big waves were a big bonus for this shot!

I used the The Photographer’s Ephemeris to plan ahead. It’s an app that uses shows you precisely where the sun & moon will rise and set using Google Maps. It’s a really cool tool for photographers!