A satellite image shows an enormous plume of sand and dust that blanketed northern China on March 15, 2021. 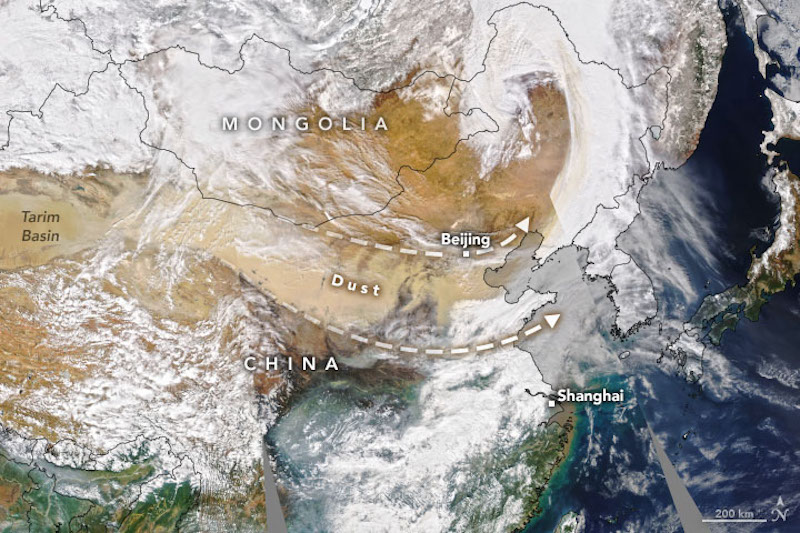 The dust is visible in this natural-color image, acquired by NASA’s Aqua satellite on March 15, 2021. Image via NASA Earth Observatory.

Dust storms are common across Asia in springtime. But on March 15, 2021, the largest and strongest dust storm in a decade swept across northern China. In Beijing, sand swirled though the air, and the skies were a hazy orange.

According to NASA, satellite data showed the plume originated from the Taklamakan Desert in northwestern China. The dry, barren area is a major source of airborne dust that can travel especially high and far on the strong winds of spring. From the Taklamakan, the dust moved eastward for thousands of kilometers.

CNN reported that photos from Beijing – a city of 21.7 million – showed skyscrapers and cars shrouded in a thick haze. Air quality reached well into the “hazardous” level of the Air Quality Index and authorities advised residents to stay indoors. Dust tinted the sky orange, reducing visibility to less than 3,300 feet (1,000 meters).

According to NASA scientist Hiren Jethva, it’s uncommon for dust storms to grow so large so fast. He said satellite images from March 14 show no signs of dust transport. But one day later, the event had developed into a widespread, severe storm.

Bottom line: Meteorological spring is just getting underway, and already an enormous plume of sand and dust has blanketed northern China. It has been called the largest and strongest such storm to strike the region in a decade.