Remember the famous bright spots on dwarf planet Ceres? Some thought they looked like signs of an alien intelligence. Here’s a recent view from a new angle, by the Dawn spacecraft. 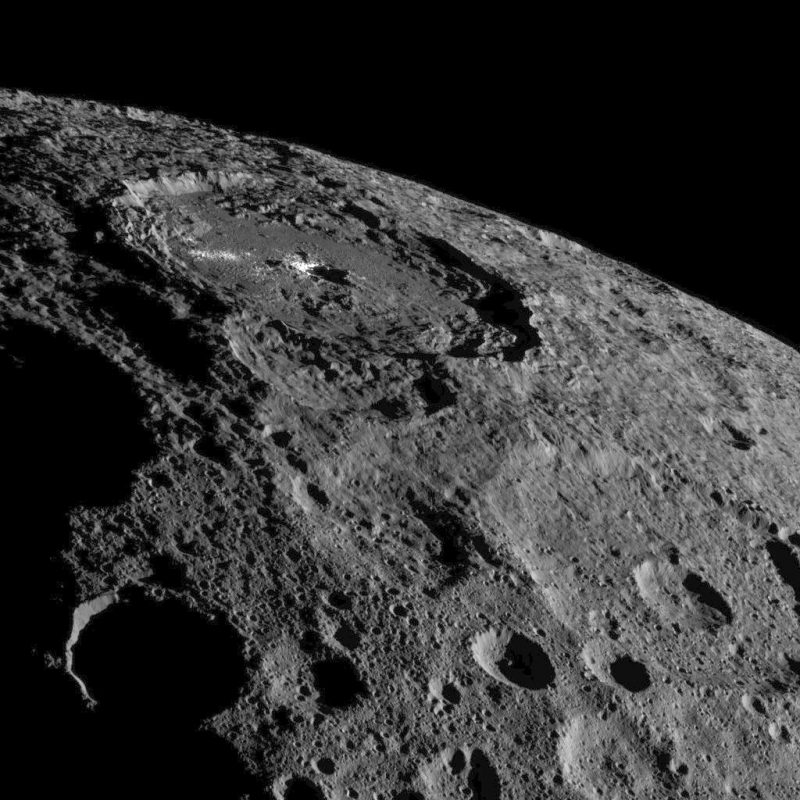 It looks like the moon, but it’s Ceres, largest body in the asteroid belt, now classified as a dwarf planet. This image shows Occator Crater, some 57 miles across and home of Ceres’ famous bright spots. Image via Dawn spacecraft/ NASA JPL/ Caltech/ UCLA/ MPS/ DLR/ IDA.

This dramatic new view from NASA’s Dawn spacecraft was taken October 16, 2016 from Dawn’s fifth science orbit, about 920 miles (1,480 km) above Ceres. Since arriving at Ceres in March 2015, Dawn has shifted between various orbits to give us amazing views of this little world. It reached this new orbit in early October. In this image, the angle of the sun was different from that in previous orbits.

This image shows the famous bright spots in Occator Crater on Ceres. There’s a central bright region and secondary, less-reflective areas, prominent near the limb, or edge, of Ceres in this image. NASA said:

At 57 miles (92 km) wide and 2.5 miles (4 km) deep, Occator displays evidence of recent geologic activity. The latest research suggests that the bright material in this crater is comprised of salts left behind after a briny liquid emerged from below, froze and then sublimated, meaning it turned from ice into vapor.

The impact that formed the crater millions of years ago unearthed material that blanketed the area outside the crater, and may have triggered the upwelling of salty liquid.

Read more: Bright spots began to be confirmed as salt deposits in late 2015

Read more about the Dawn mission to Vesta and Ceres

February 2015 image of Ceres by Dawn, as the craft approached the dwarf planet. At first, many thought these 2 famous bright spots on Ceres looked like alien lights, but now – thanks to Dawn – we know there are many bright spots on Ceres and that they are likely salt deposits. Image via NASA/JPL-Caltech/UCLA/MPS/DLR/IDA