Cas A seen in X-rays

Cassiopeia A – Cas A, for short – is the debris field left behind after a massive star exploded. 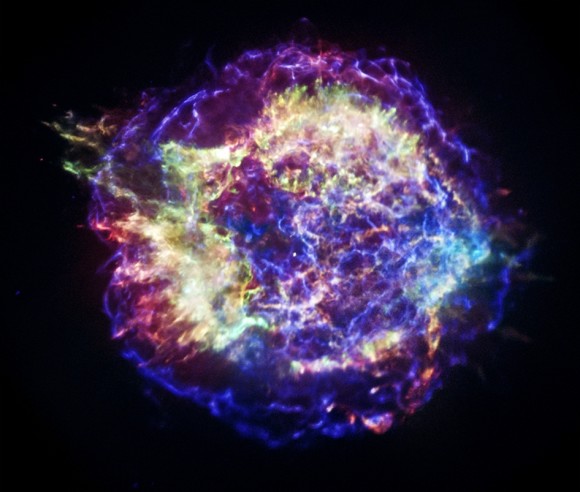 This is Cassiopeia A. Astronomers call it Cas A for short. It’s the youngest supernova remnant in the Milky Way and brightest extrasolar source of radio waves in our sky. This image – taken in X-rays by NASA’s CHANDRA X-ray Observatory – shows the debris field left behind after a massive star exploded. The explosion should have appeared in Earth’s sky over 300 years ago, but there are no historical records of any sightings of the supernova. One theory is that interstellar dust absorbed the visible radiation before it reached Earth.

New analysis shows that this supernova remnant acts like a relativistic pinball machine by accelerating electrons to enormous energies.

In this image, the blue, wispy arcs show where the acceleration is taking place in an expanding shock wave generated by the explosion. The red and green regions show material from the destroyed star that has been heated to millions of degrees by the explosion.