After so many amazing images of Pluto and Charon, it’s time to remember some other fascinating worlds within our solar system. Here is Saturn’s moon, Tethys … 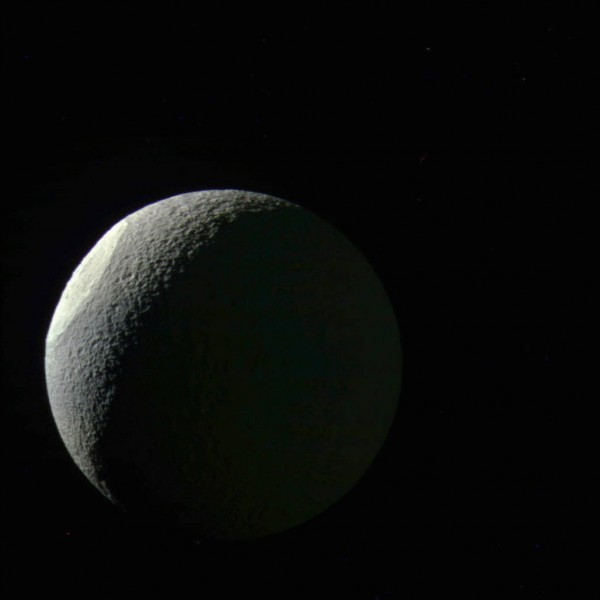 View larger. | Tethys, as captured by the Cassini spacecraft on May 9, 2015 at a distance of approximately 186,000 miles (300,000 km) from Tethys. Ultraviolet, green and infrared spectral filters were combined to create this color view. North on Tethys (660 miles or 1,062 km across) is up in this view. Image via NASA/JPL-Caltech/Space Science Institute

Here is one of the planet Saturn’s 62 moons, Tethys, seen by the Cassini spacecraft, which has been in orbit around Saturn since 2004 and which has provided a wealth of dazzling images.

This is a color image, and, NASA says:

In this image, with the range of colors visible to Cassini’s cameras, differences in materials and their textures become apparent that are subtle or unseen in natural color views.

Here, the giant impact basin Odysseus on this moon stands out brightly from the rest of the illuminated icy crescent. This distinct coloration may result from differences in either the composition or structure of the terrain exposed by the giant impact.

In this image, you can also see Tethys’ dark side (at right), faintly illuminated by sunlight reflected from Saturn.

Read more about this image at NASA.gov