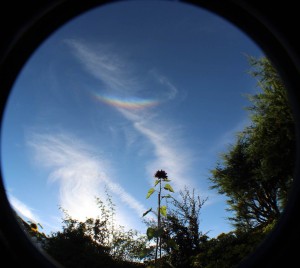 Sun halo spotted on the school run, dashed home for camera then the Circumzenithal arc appeared above smiling – worth dashing home for! Smiling in the sky, upside down rainbow :) Only lasted 10 minutes then it was gone, brief but beautiful.

Thank you! Your submission has been received!
Oops! Something went wrong while submitting the form.
END_OF_DOCUMENT_TOKEN_TO_BE_REPLACED