Spectacular flaming fringe on the setting sun over Mutare, Zimbabwe, caused by a bush fire concealed behind the point on the hill over which the sun went down.

I was tempted by EarthSky’s extensive coverage on the equinoxes to check out and photograph the equinox sunset here in Mutare, Zimbabwe on September 22, 2015 and recorded much more than anticipated. To my surprise it turned out to be literally a blazing one due to the fortuitous occurrence of a bush fire concealed behind the exact point on the hill over which the sun went down.

The video above, which was taken to capture the setting sun and any visible sunspots, shows the unexpected appearance of a spectacular flaming fringe just below and to the left of the solar disk as it descends behind the tree lined summit.

This display which made the sun look as though it was ablaze, was caused by rapidly changing refraction of the setting sunlight by hot air and smoke rising from the hidden fire.

Twenty minutes later, just before dark, flames from it crossed the brow of the hill at the same location destroying vegetation between some of the trees behind which the sun had set.(lower half of image below). 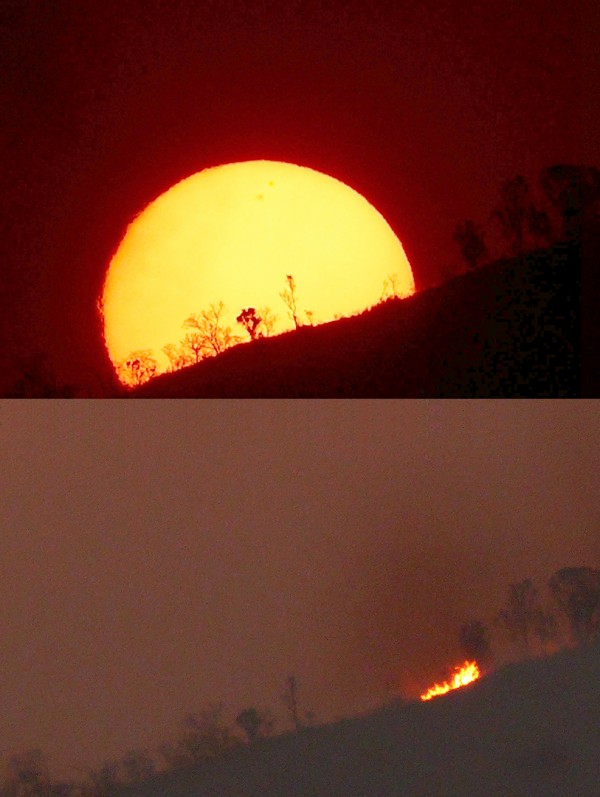 This mosaic shows how closely the sunset coincided with the later appearance of fire. Photo by Peter Lowenstein.