Satellites have detected an iceberg adrift in the South Atlantic Ocean. It’s big … but doesn’t meet the criteria for tracking or naming. 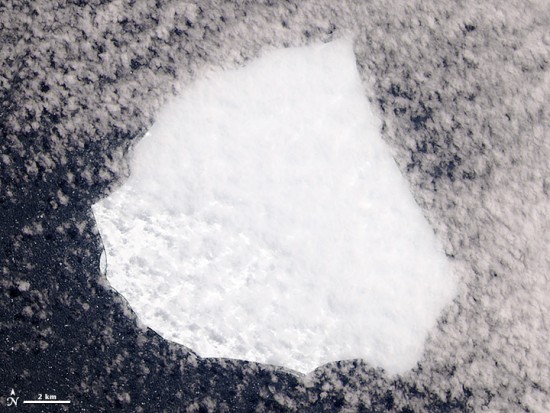 Landsat 8 acquired this image of an unnamed iceberg adrift in the South Atlantic Ocean on December 3, 2014. Image via NASA Earth Observatory.

Only icebergs that have a side measuring at least 19 kilometers (12 miles) long are named and tracked by the U.S. National Ice Center. That means nearly round or square icebergs—like the one pictured above—can be quite large and still not meet the criteria for naming and tracking.

But it’s still a big iceberg and so interesting. Icebergs such as this one break off from Antarctica, but scientists aren’t sure exactly where on the continent this one broke away.

In that way, it’s different from iceberg B31, a much bigger iceberg, which broke away from Antarctica’s Pine Island Glacier in late 2013 and has been hugging the Antarctic continent since then. B31 is a whopping 240 square miles (over 600 square kilometers). NASA recently re-acquired it via satellite, and, although B31 does meet the criteria for tracking and naming, for now it remains in the Amundsen Sea near Antarctica, although free now of surrounding debris and sea ice.

Large icebergs like these pose a danger to ships. For example, in 2007, the MS Explorer, a small Canadian cruise ship, sank after striking an iceberg near the South Shetland Islands.

Read more about the unnamed iceberg from NASA’s Earth Observatory.

Read more about the even bigger iceberg B31. 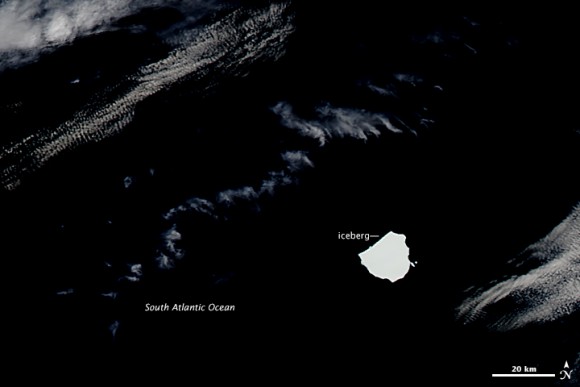 NASA’s Aqua satellite captured this image of the large iceberg in the South Atlantic on December 5, 2014. Image via NASA Earth Observatory.