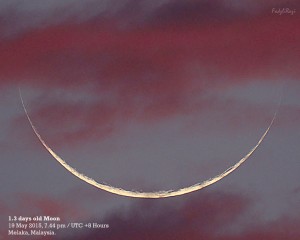 The youngest moon shot we received this month is this one, from Mohamad Fadzli in Malaysia. He caught the moon as evening fell, early in Earth’s “day” – that is, just west of the International Date Line – on May 19, 2015. Thank you, Mohamad!

Thank you! Your submission has been received!
Oops! Something went wrong while submitting the form.
END_OF_DOCUMENT_TOKEN_TO_BE_REPLACED