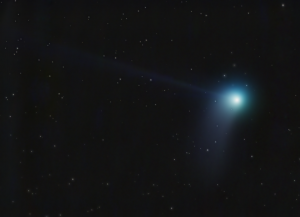 Mark Shelton
E-mail markshelton@outlook.com
Website markshelton@outlook.com
Location Birmingham
Date and Time Taken 15-16 January 2016
Story behind the image Comet Catalina has been a difficult object for me to photograph as my site is heavily light polluted being only 4 miles from Birmingham Airport. The comet has been very low & the weather bad up to the day when the photographs were taken. I struggled with either the full moon on clear nights or poor transparency but I think the result was worth it as we will probably never see this again
Equipment Details Celestron 11″ RASA on a Paramount MX+ mount
Atik 11000 mono ccd camera
Baader 2″ LRGB filters
Guiding at custom speed on the comet using the SkyX
Post-processing Details 54 UVCUT exposures 2 mins each
30 Red Green Blue exposures of 2 minutes
Total integration time 288 minutes
Star mask appended to the L stack theen added as a layer in Photoshop CS6
All comet stacking & noise reduction performed in PIxInsight
Manual alignment of layers in Photoshop CS6
Image Links catalina.PNG

Thank you! Your submission has been received!
Oops! Something went wrong while submitting the form.
END_OF_DOCUMENT_TOKEN_TO_BE_REPLACED