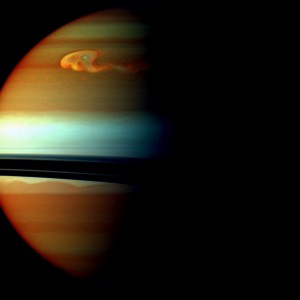 Taken in late December 2010, this image shows Saturn in the infrared using a combination of 3 different filters. What you see here in this false-color as white and blue are actually clouds high in the atmosphere; yellow/green are mid-level clouds, and red/orange deeper material. The rings are edge-on right in the middle, and you can see the shadow they cast on the planet. From its reddish hue, this storm was deep in Saturn’s atmosphere. it apparently has two eyes — if ever that term were accurate, it’s here — with one being deeper in the clouds than the other. Clearly, the tail had just started to form.

Thank you! Your submission has been received!
Oops! Something went wrong while submitting the form.
END_OF_DOCUMENT_TOKEN_TO_BE_REPLACED