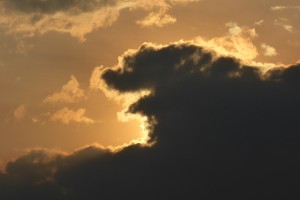 Pareidolia is a psychological phenomenon involving a stimulus wherein the mind perceives a familiar pattern of something where none actually exists. Common examples are perceived images of animals, faces, or objects in cloud formations (such as this one), the man in the moon, and very recently the skull in the Halloween image of asteroid 2015 TB1 45 released by the NSF’s Arecibo Observatory! This Barking Dog Cloud image was captured using a Panasonic Lumix DMC-TZ60 compact camera in sunset auto mode and x 30 zoom magnification

Thank you! Your submission has been received!
Oops! Something went wrong while submitting the form.
END_OF_DOCUMENT_TOKEN_TO_BE_REPLACED