A beautiful shot of bar-headed geese – one of the world’s highest flying birds – over a wetlands in India in November 2014. Photo by Abhinav Singhai.

EarthSky Facebook friend Abhinav Singhai in India captured this evocative shot of bar-headed geese over Basai Wetlands, a well-known destination for birders near Delhi, India. He said there were hundreds of geese over the wetlands that day.

The bar-headed goose is a fascinating bird, by the way, and one of the world’s highest-flying birds. It’s been heard flying across Mount Makalu – the fifth highest mountain on Earth at 8,481 meters (27,825 ft). The British explorer George Lowe is said to have reported seeing bar-headed geese flying over Mount Everest – 8,848 meters (29,029 ft)! You’ll find mention of Lowe’s tale about the geese here.

According to Wikipedia, the bar-headed goose is:

… a goose that breeds in Central Asia in colonies of thousands near mountain lakes and winters in South Asia, as far south as peninsular India …

The bird is pale grey and is easily distinguished from any of the other grey geese of the genus Anser by the black bars on its head. 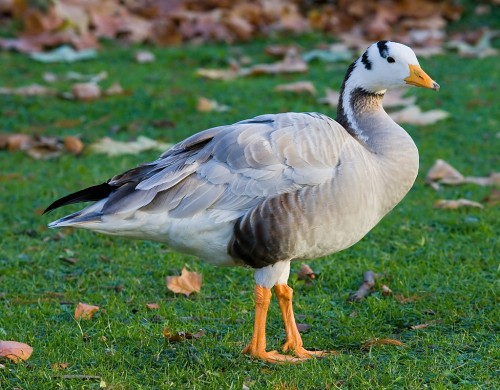 Bottom line: A beautiful shot of bar-headed geese flying over a wetlands in India in November 2014. Photo by Abhinav Singhai.