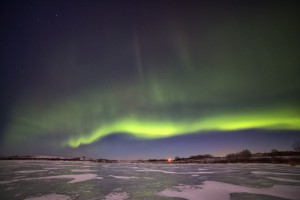 I was out on a prairie lake with the Coyotes howling at the northern lights. I was using my Rokinon 14mm lens but the EXIF shows a different lens., the settings are 14mm at f2.8. At this point a new pulse of electrons had come in an the structure changed to a bright ribbon with shards overhead remember this is with a 14mm lens the 180 degree Northern sky is all glowing! The aurora charges from the right or Northeast and flows to the left the Northwest. I spent some time trying to capture this movement:) The moon was adding the light to the foreground but there is still a reflection.

Thank you! Your submission has been received!
Oops! Something went wrong while submitting the form.
END_OF_DOCUMENT_TOKEN_TO_BE_REPLACED