Beautiful aurora seen in Oregon on Friday night (May 31-June 1). Ben Coffman was at Trillium Lake, near Mount Hood, when he captured it. 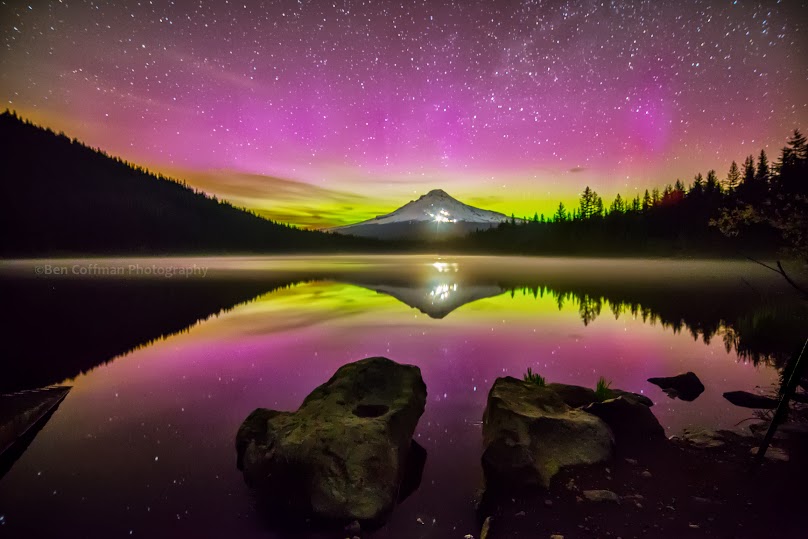 View larger. | Aurora over Mt. Hood in Oregon as captured by Ben Coffman Photography during the night of May 31-June 1, 2013. Visit Ben’s photography page on G+ or visit Ben on Facebook.

Hi, EarthSky, we don’t often get auroras as far south as Oregon (and when we do, we don’t often have clear skies), so it was a real treat to catch an aurora storm last night at Trillium Lake. That’s Mt Hood in the background. The white lights on Mt. Hood are Sno-Cats grooming the snowfields, and the largest light is probably Timberline Lodge, which was used as the exterior shot for the hotel in The Shining …

After a week of relatively quiet geomagnetic activity, meaning fewer auroras, people did begin to see auroras beginning Friday night. Then during daylight hours on June 1, there was a moderate geomagnetic storm, following the arrival of an interplanetary shock wave on May 31, whose source was a bit mysterious. According to Spaceweather.com:

… it might have been a minor CME that left the sun without drawing attention to itself.

Is there a chance you’ll see an aurora tonight? Yes! As always, far northern latitudes are favored. But, as Ben’s photo shows, auroras can sometimes be seen farther south. Tonight’s chances are good. Take a look!