Astronauts aboard the International Space Station took this panoramic photo looking northeast from a point about halfway along the Aleutian Island chain. 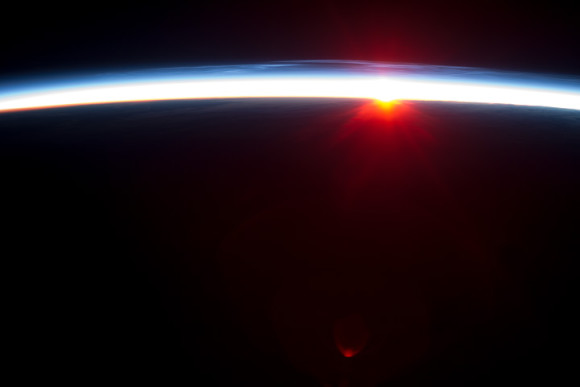 International Space Station (ISS) astronauts acquired this image about 15 minutes after local midnight in early August 2013. From their vantage point at 222 kilometers (138 miles) above Earth, the astronauts were able to look northeast and see a near-midnight sunrise (when it was approaching noon in England). The rising sun makes a red, teardrop-shaped reflection in the lower center of the image – perhaps a reflection within the camera lens from the window frame, or from some item inside the spacecraft.

Long, blue-white ripples appear in the atmosphere above the midnight sun. These are noctilucent or “night-shining” clouds. Some astronauts say these wispy, iridescent clouds are the most beautiful phenomena they see from orbit. Noctilucent clouds are best seen after sunset, when the viewer is on the night side of the day-night line and these high clouds are still lit by the Sun. Crews are trained in this somewhat complicated geometry of clouds being lit from beneath, the spacecraft in sunlight, and the ground below in darkness.

Noctilucent clouds are also known as polar mesospheric clouds (PMCs), as they appear in the summer hemisphere over polar latitudes. Some data suggest that these clouds are becoming brighter and appearing at lower latitudes, perhaps as an effect of global warming.

Polar mesospheric clouds are interesting because they form much higher in the atmosphere (75 to 90 kilometers) than the normal rainclouds that form in the lowest, densest, “weather-layer” below 15 kilometers. The weather layer, or troposphere, appears in this image as a thin, orange line along the left horizon.