Arctic sea ice near its maximum for 2013

Arctic sea ice near its maximum for this year, in Canada’s Gulf of St. Lawrence. 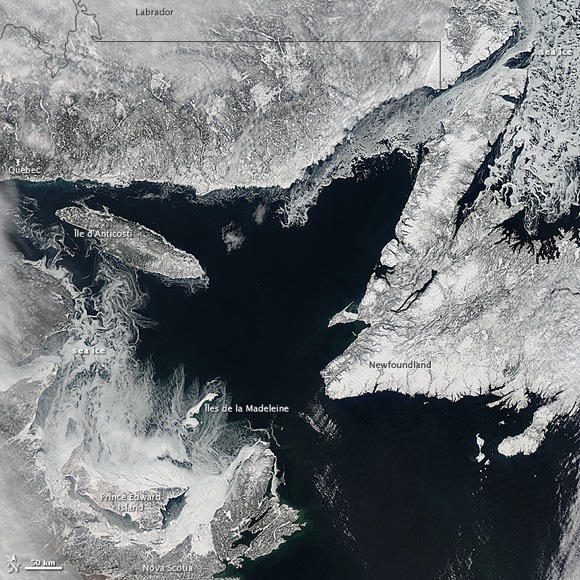 As sea ice nears its maximum, it often begins to form in Canada’s Gulf of St. Lawrence. That’s likely what was happening when the Moderate Resolution Imaging Spectroradiometer (MODIS) on NASA’s Aqua satellite acquired this natural-color image on February 11, 2013.

Arctic sea ice – at Earth’s most northerly latitudes – shrinks and grows on a yearly cycle. It reaches its minimum in September and its maximum in February or March. This satellite image from February 11 shows sea ice near its maximum for this year, in Canada’s Gulf of St. Lawrence.

There have been some lower-than-average temperatures in this region in winter 2013, but this year’s sea ice maximum is not very different from the norm.

Read more about this image from NASA’s Earth Observatory

Meanwhile, especially in the past decade, there has been much discussion about each year’s sea ice minimum in the Arctic. It’s the summertime Arctic sea ice that has appeared dramatically smaller each year, due to warming temperatures in the Arctic in summer. Check out these two maps, created from satellite data, comparing the Arctic ice minimum extents in 2012 and 1984.