This Comet Pan-STARRS isn’t as bright as the one many saw in spring 2013. But some observers are reporting a recent outburst in brightness … 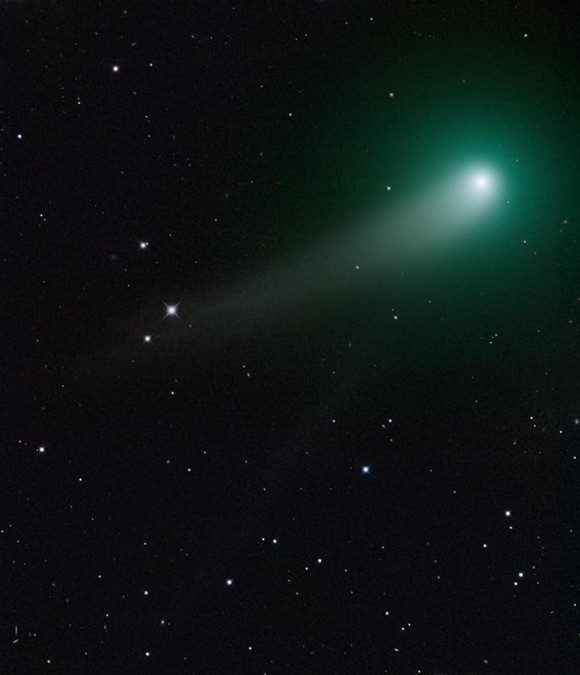 View larger. | Adam Block at Mount Lemmon Observatory captured this beautiful image of Comet C/2012 K1 Pan-STARRS on May 5, 2014. Click here for more details about this photo. Used with permission.

Remember the Comet Pan-STARRS that was visible in our night sky in northern spring 2013? Here is a different Comet Pan-STARRS … not as bright as the one a year ago, but currently being watched by experienced skywatchers using binoculars or a telescope. This comet is C/2012 K1 Pan-STARRS. Adam Block at Mount Lemmon Observatory captured its image on May 5.

Justin McCollum of the Houston Astronomical Society (HAS) has been observing K1 Pan-STARRS, too. The comet is now in the morning sky, but will be shift into the evening sky before reaching its conjunction with the sun on August 9. Justin wrote that the comet has had a small outburst in brightness recently:

… myself and two other astronomers at the [HAS] George Observatory … observed in both a 10″ and 18″ Newtonian telescopes and it appears much brighter against the Houston light dome. I would say it is currently at 7th magnitude, but its original light curve would not place it at a maximum brightness of magnitude 6.0 until September, but if this keeps up then it could get as bright as 4th magnitude [Editor’s Note: in other words, visible to the eye] if it maintains the general properties of its light curve. However, it could fade out if this is just an outburst even though it is a couple of months away from reaching perihelion.

Thanks to Adam Block of Mount Lemmon, and to Justin McCollum and Michael Lloyd of the Houston Astronomical Society, for the heads up on Comet C/2012 K1 Pan-STARRS!