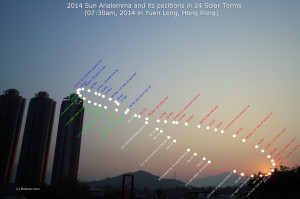 The figure-8 shaped curve was taken as the path of the Sun at 07:30am (HKT, UTC+8) in the year 2014, highlighting with the 24 solar terms.
Due to cloudy or rainy days, the image may be taken before / after the solar term day and are marked +/- nd(ays).
That year’s two equinoxes on March 21 (0° longitude) and September 23 (180° longitude) correspond to the mid-points but not the cross-over point, on the curve.
While summer solstice on June 21(90° longitude) and winter solstice on December 22 (270° longitude) are located at the top-left and bottom-right on the curve respectively.

Thank you! Your submission has been received!
Oops! Something went wrong while submitting the form.
END_OF_DOCUMENT_TOKEN_TO_BE_REPLACED