An aurora, and the start of meteor season

The sun is in an active part of its 11-year cycle, so auroras have been frequent. Meanwhile, summer meteor season in the Northern Hemisphere is gearing up. 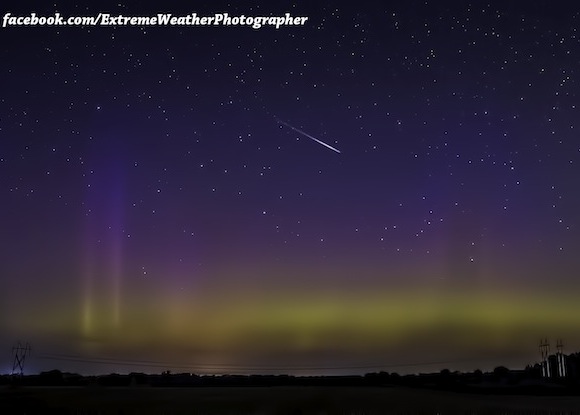 An aurora and a meteor from Jeremy Friebel. More of his photos can be seen on Facebook at ExtremeWeatherPhotographer.

Jeremy Friebel captured this meteor streaking past against a background of the aurora borealis, or northern lights, on July 15, 2013. He was in Center Valley, Wisconsin. Thank you, Jeremy!

What are the prospects for northern summer meteor season this year? The best warm-weather weeks for watching meteors in the Northern Hemisphere always begin around now. The season peaks from late July to about mid-August. But, right now, the moon is waxing toward full. The July 2013 full moon – on July 22 – will be another supermoon, and it’ll drown the beginning of the 2013 summer meteor season in its glare. Meteor aficianados will be waiting for the days after full moon, when the moon will be waning and casting less light in the sky. The best time for watching summer meteors in 2013 will probably begin around the first week of August.

Does that mean you should wait until August to start watching for meteors? Heck, no. As Jeremy’s photo shows, the meteors are beginning to fly. Start watching now, whenever you find yourself beneath a clear country sky, and maybe you’ll see a meteor (or two or more!) streaking along in bright moonlight.

For more about 2013 meteors, check out EarthSky’s meteor guide.