The valiant MESSENGER spacecraft made Earth, Venus and Mercury flybys before its Mercury orbit four years ago. Soon it’ll crash into Mercury, but for now … new images! 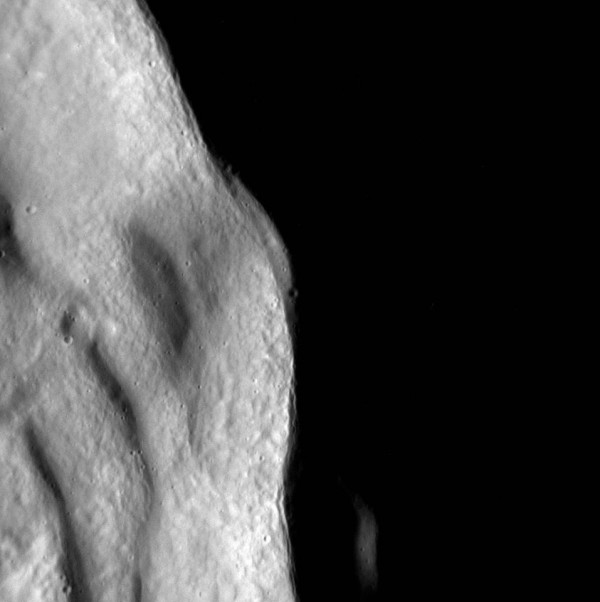 The MESSENGER spacecraft acquired this image of Mercury on January 23, 2015, at a time when this part of Mercury was near sunset. It’s one of the highest-resolution images yet obtained of Mercury. The area shown is 6.3 kilometers / 3.9 miles wide. It’s located within what is called the Hokusai Quadrangle in the northern hemisphere on Mercury. The image shows terraces on a west-facing crater wall. The terracing forms just after the crater is excavated by the impact, and the walls are too steep to support themselves, causing slumping.

The MESSENGER mission has been a huge and unqualified success. Launched on August 3, 2004, this valiant little spacecraft completed an Earth flyby, 2 Venus flybys and 3 Mercury flybys before orbital insertion around Mercury on March 18, 2011. As it is now running low on the propellant needed for course adjustments, MESSENGER will soon suffer orbital decay and ultimately is destined to crash into Mercury.

You can see that Mercury keeps getting close to Mercury, but its controllers, so far, have been able to raise its orbit again.

MESSENGER was expected to impact Mercury on the weekend of March 28 or 29, 2015. An unexpected bonus of using unused helium from the pressurant system may delay impact to late April 2015, with a final helium pressurant thrust now planned for March 18, 2015 – the fourth anniversary of its orbital insertion around Mercury – performing the final-ever periherm raise maneuver.

Bottom line: One of the highest-resolution images ever obtained of the sun’s innermost planet, Mercury. The valiant MESSENGER spacecraft acquired the image on January 23, 2015.