The green flash is an optical phenomenon you can see shortly after sunset or before sunrise. For a second or two, the upper rim of the sun flashes green. 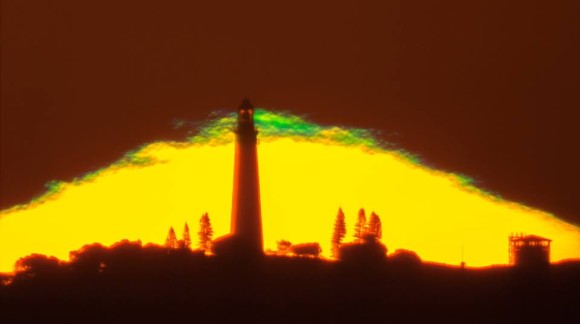 Colin Legg of Australia caught this amazing green flash – a flash of the color green at the upper rim of a setting sun – earlier this week. He calls this shot Sun Pyramid. He wrote:

Some funky aberrations and distortions in this one. We had nice seeing in Perth this evening, so I shot a video of the sun setting behind Rottnest island lighthouse from Cottesloe beach. To avoid wind jitter, I setup at the local rugby tavern and asked the players to not kick in my direction. Pretty impressive view through 23 km of atmosphere.

Now here is the video itself. Watch toward the end for 3 green flashes and a hint of a blue flash. Thank you, Colin!