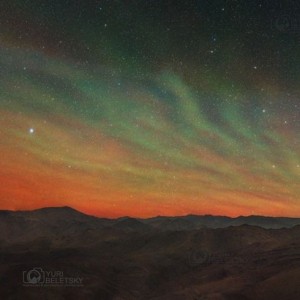 What is THAT ?! smile emoticon Those are not clouds. This isn’t aurora either. We just witnessed an amazing airglow here in Atacama desert. Few nights after Geminids meteor shower we had another show on the night sky smile emoticon It was so intense that one couldn’t really see many stars close to the horizon – the sky was literally “shining”. I write “shining” because unfortunately one can’t see the colors of airglow (it’s still much less intense then aurora), but a sensitive digital camera is able to capture the phenomenon in its glory. I hope you’ll enjoy the view !

Thank you! Your submission has been received!
Oops! Something went wrong while submitting the form.
END_OF_DOCUMENT_TOKEN_TO_BE_REPLACED