Airglow is light that originates in the high atmosphere, associated with photochemical reactions of gases caused by solar radiation. Thank you Kristal Leonard-Ferrara! 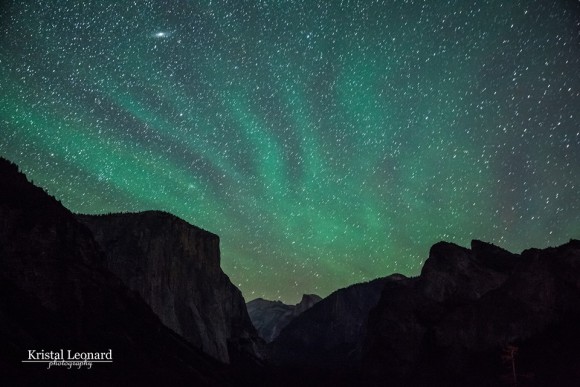 This awesome photo was taken by EarthSky Facebook friend Kristal Leonard-Ferrara. Here’s what she said about it:

Last night, I saw one of the most amazing displays of airglow I’ve ever seen!

Airglow is light that originates in the high atmosphere and is associated with photochemical reactions of gases caused by solar radiation, but is chemically different than aurora. The bands of airglow were radiating from the East and were wavier than I’ve ever seen them. They were so strong, I could see them with the naked eye (which I’ve never been able to do.) Here’s one of the many shots I got last night, from around 1am at Tunnel View. Notice the Andromeda Galaxy in the sky above El Capitan!!