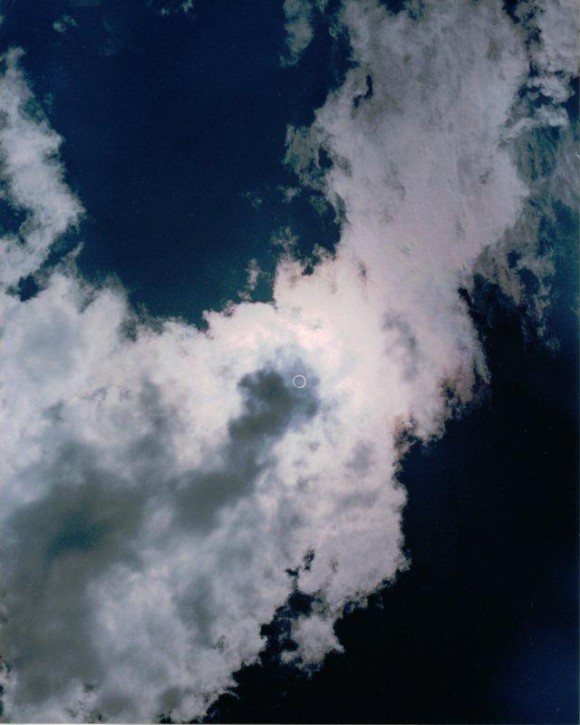 Never peer directly at the sun – even through clouds – at any time. The sun is so blindingly bright that, unless it’s completely blocked by the moon during a total solar eclipse, it can permanently damage your eyes. The eclipse happening today (May 9 for those east of the International Date Line; May 10 for those west of it) is essentially a partial eclipse in that the sun will not ever be completely covered by the moon. Instead, at mid-eclipse, a thin ring of the sun’s outer surface will appear in a circle around the silhouetted moon, to those standing along the eclipse path running through Australia and the Pacific Ocean. You will need to watch online or use a safe filter or projection technique, to view the May 9-10 solar eclipse.

The photo above shows an eclipse similar to today’s event. It’s the annular solar eclipse of May 20, 2012, as captured by Ric Shanahan. Astronomy magazine also published this photo last year. We asked Ric about his use of a solar filter, for eye protection. He said:

My wife bought me a Thousand Oaks solar filter just for [the May 20, 2012 eclipse]. I had taken many shots through the filter but just as the sun and moon were coming into alignment the clouds started to roll in. One of the club members said “Look at that!” I removed the camera (a Pentax K1000) from the tripod, focused on infinity, and took this shot handheld with no filter … I enjoy your newsletter! Thanks for all the work that must go into it!

In other words … Ric knew what he was doing, but don’t try this at home! For today’s eclipse, watch online or use one of these eye safety techniques.

If you’re in Australia, the eclipse happens after sunrise May 10