A rare sky over northern Idaho

A 22-degree halo and circumzenithal arc, an upper tangent arc and 2 more rare arcs … good day to have a head in the clouds. 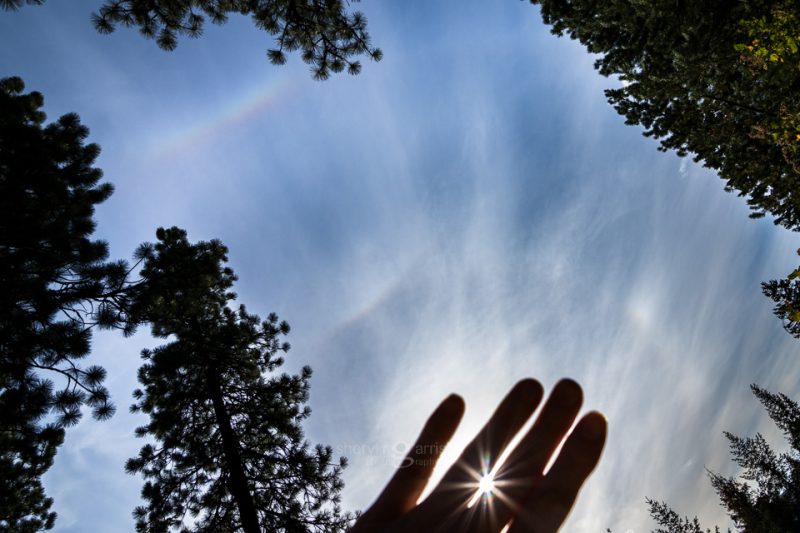 See the circumzenithal arc – like an upside rainbow – in the upper left of this photo? There’s a lot more going on here, too, explained below. Photo by Sheryl R. Garrison.

Sheryl R. Garrison in northern Idaho submitted this photo, which she captured on August 13, 2016. She wrote:

After waking up to cirrus clouds I spent the day keeping an eye on the skies and was rewarded by beautiful irridescent clouds, the off-and-on appearance of a 22-degree halo, and then finally a circumzenithal arc.

After capturing several images I was in touch with Les Cowley at www.atoptics.co.uk and he very generously helped me identify in addition to the 22-degree halo and the circumzenithal arc, an upper tangent arc and two rare arcs … a supralateral arc and an upper suncave Parry arc!

He also sent a label enhanced version of my image [below] which was very helpful.

An exciting day with my head in the clouds!

Thanks, Sheryl, and congratulations on this cool image!

Bottom line: A 22-degree halo and circumzenithal arc, an upper tangent arc and two rare arcs … a supralateral and an upper suncave Parry.